A distant poor relative of the Duke D'Ascoyne plots to inherit the title by murdering the eight other heirs who stand ahead of him in the line of succession.


When his mother eloped with an Italian opera singer, Louis Mazzini (Dennis Price) was cut off from her aristocratic family. After the family refuses to let her be buried in the family mausoleum, Louis avenges his mother's death by attempting to murder every family member (all played by Alec Guinness) who stands between himself and the family fortune. But when he finds himself torn between his longtime love (Joan Greenwood) and the widow of one of his victims (Valerie Hobson), his plans go awry.

"Kind Hearts and Coronets" is listed in Time's top 100 and also at number six in the BFI Top 100 British films.

I was going to say that nearly everyone in the film is unlikable, but there are a few of the D'Ascoynes who aren't actively horrible, just in the way.

Still, the sourness of the characters, particularly the protagonist, kind of ruins the fun for me - absent a reason to root for the protagonist, the chief remaining appeal is the gimmick of Guinness playing an absurd number of roles. Or at least theoretically different roles - alas they're not especially distinct from one another.

Of the Ealing comedies I think I prefer "The Man in the White Suit" but this one is certainly worth a watch. I just don't think it's a bit overrated.
posted by Nerd of the North at 11:43 PM on October 15, 2022

The first time I saw this, I had the funny feeling that I somehow understood some of the Monty Python sketches on a whole new level.
posted by EmpressCallipygos at 5:37 AM on October 16, 2022 [2 favorites]

I think if one were to watch the full complement of Ealing Comedies you'd probably get a good idea of British culture in the late forties and early fifties (and therefore the foundation for the culture of the sixties and seventies). As usual for Ealing, even when we're intimately complicit with a sociopathic serial killer, crime cannot go without at least the suggestion of retribution.

As with the other major Ealing films, I've seen this innumerable times, but I agree it's difficult to feel as affectionate for it as one might for The Ladykillers or Hue and Cry.

The Tit-Bits reporter is Arthur Lowe, who is best known as Captain Mainwaring in Dad's Army.

The cinematographer is Douglas Slocombe, who did a lot of the Ealing films and went on to do The Italian Job, Rollerball and the first three Indiana Jones movies. Cinematographers do get around, don't they?
posted by Grangousier at 7:16 AM on October 16, 2022 [1 favorite]

My favorite line from this movie: Louis Mazzini : I shot an arrow in the air; she fell to earth in Berkeley Square.

I know Peter Sellers is a problematic person in many ways, but I still prefer his comedies. I love A Shot in the Dark so much.
posted by gudrun at 7:44 AM on October 16, 2022 [1 favorite]

People should be warned that there's a random use of the n-word (in a saying, IIRC, not applied to a specific person) that comes out of nowhere.
posted by praemunire at 9:59 AM on October 16, 2022 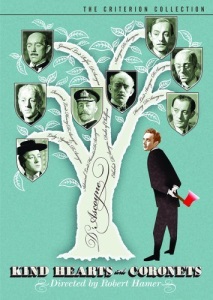