Born as an 18th-century lord, Louis (Brad Pitt) is now a bicentennial vampire, telling his story to an eager biographer. Suicidal after the death of his family, he meets Lestat (Tom Cruise), a vampire who persuades him to choose immortality over death and become his companion. Eventually, gentle Louis resolves to leave his violent maker, but Lestat guilts him into staying by turning a young girl (Kirsten Dunst) -- whose addition to the "family" breeds even more conflict.

Directed by Neil Jordan. Screenplay by Anne Rice, based on her novel.

Y'know, this is one of the few Tom Cruise movies I actually like. I've not read the book, and am not generally a fan of vampire movies, but this is one I can get into. And, to be honest, I think Cruise is the far better actor in this, compared to Pitt.
posted by Thorzdad at 11:35 AM on October 19, 2022

My wife has a funny relationship with this movie - she loves the story, the tragedy, the melodrama, the costumes, the furniture, the look. Haaaaaates the blood.

Bought a digital copy of it last weekend (she didn't want to watch ads on Tubi) and we made it through Louis transformation and when they first start stalking parties before having to nope out. There's this one section that she always has to work her way through if she wants to get to the back half that she enjoys as well. I keep trying to convince her that it's ok to fast forward to the bit she wants to watch.
posted by drewbage1847 at 4:30 PM on October 19, 2022

I absolutely hated this movie as a fan of the books. It was eventually redeemed for me when I began to just think of it as a vampire movie unrelated to the books. I did love Dunst as Claudia though.
posted by Julnyes at 12:49 PM on October 20, 2022

I will never forgive them for casting Banderas as Armand. Rice was livid over Cruise but she seemed fine with this choice and it made. No. Sense. Slater made a great Daniel, though, and Dunst was spectacular.

Holding this up against the show, it was fine for what it was at the time, but I am glad we're onto a better thing now.

I do still love the seducing of Louis scene: "I've come to answer your prayers. Life has no meaning anymore, does it? The wine has no taste, food sickens you and there seems no reason for any of it." That scene carried me through my teens.
posted by haplesschild at 1:13 PM on October 20, 2022 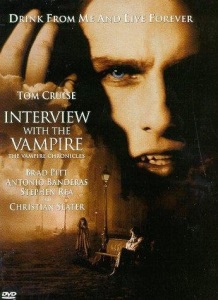