You probably know the drill by now (comic book starting sixty years ago, moving media starting in 1978): scientist, gamma rays, anger, hulk out. This is the Ang Lee movie from 2003, starring Eric Bana, Jennifer Connelly, Sam Elliott, and Nick Nolte. It is not part of the MCU proper, and sadly, was not a smash.


Some tidbits, gleaned from Wikipedia and elsewhere:

- Although the Hulk's face seems to be based on Bana's, the motion-capture and vocalizations were done by Ang Lee himself.

- The movie was in development hell for over a decade, starting in 1990, coincidentally/ironically the same year that the last TV movie from the well-known TV series aired. The script went through a number of major changes; at different times, the Hulk would have faced the Abomination, the Leader, a bunch of sharks, and some messed-up bug thing.

- Stan Lee--who had already made several cameos in other Marvel-character-based films--appears briefly in a scene, talking to Lou Ferrigno, who played the original TV Hulk.

- The MCU movie The Incredible Hulk was originally intended as a sequel to this movie, but Edward Norton, who also starred as Banner in that movie, rewrote Zak Penn's script to be more of a reboot than a sequel; other parts, including Betty Ross and her father, were recast.

- 62% on Rotten Tomatoes; "While Ang Lee's ambitious film earns marks for style and an attempt at dramatic depth, there's ultimately too much talking and not enough smashing."

It is not part of the MCU proper..

And sadly the film's poor box-office performance eliminated the already slim chance that we might someday see a crossover with Eat Drink Man Woman..
posted by Nerd of the North at 6:54 PM on October 19, 2022 [4 favorites]

Well, Spider-Tobey and Spider-Andrew weren’t part of the MCU either, and we see what happened there.

I think it is calculated that the 2008 Hulk movie* agrees in broad strokes with the events of the 2003 movie (or at least does not explicitly contradict it). Bill Bixby Hulk? 100% different continuity. Eric Bana** Hulk? Er, yeah, I suppose. I was mildly disappointed at the news that with the recent passing of William Hurt that it now seems that Harrison Ford is lined up to play Thunderbolt Ross; putting Sam Elliott back in the role without otherwise addressing the differences would have been exquisite.

* Itself the grudgingly admitted black sheep of MCU canonicity. The recent return of Blonsky (and imminent return of Stearns) helped reel it in, but it was adrift for a long eight years before anyone from that movie turned up again or was even mentioned.

** It is pleasing that Bruce Banner is played by an Aussie actor, in whose native non-rhotic accent, “Banner” is reasonably close to “Bana.”
posted by ricochet biscuit at 7:14 PM on October 19, 2022 [2 favorites]

This movie gets badmouthed, but that scene of Hulk flying free with a look of serenity on his face has stuck with me ever since I saw this movie. And maybe seeing it again will replace the version in my brain with some harsh reality, but at least Ang Lee was swinging for the fences, cinematically speaking.
posted by RakDaddy at 8:08 PM on October 19, 2022 [2 favorites]

A lot of Ang Lee's work in this movie really is exquisite; there are not one or two but several scenes/shots of Hulk bounding across the desert that are fantastic, as well as some other bits that are also great--the fight in the redwood forest, the final fight that's partially in the clouds (with lightning bolts capturing stills of Hulk vs. his dad in freeze-frame strobes), even the scenes at the old base that get the desolation of the remote location.

Not so great are a lot of the aspects of the script, which seems to have suffered from passing through way too many hands; the origin is ridiculously overcomplicated, by trying to incorporate every possible type of origin for the Hulk or similar superheroes: genetic engineering (just trying to keep track of how many types of animal DNA that David Banner uses is a headache), bad childhood/bad dad, gamma explosion out in the desert, medical nanotechnology, and "accidental" exposure to more gamma rays. (Per ricochet biscuit above, at least the revised origin in the next movie, besides tying it into the MCU, had the virtue of simplicity.) Glenn Talbot, who shares villain status with David, is staggeringly dumb--even before his last scene, he has a bit where he's jabbing absolutely the last person on the globe that you'd want to piss off with a Taser baton, in a very tight space; not far behind is Thunderbolt Ross, who lets Dad Banner (who he never seems to have trusted) sit next to his son without anyone between them, oh, and good job with that high-voltage cable that David could literally bite through. How Ross kept his job after ordering his men to fire on the Hulk and endanger or partially destroy one natural and one man-made landmark is beyond me.

I'm kind of divided on Lee's use of multiple split-screens to simulate comic book panels; it's certainly a unique technique, but pretty distracting what with putting several potential points of attention on the screen at once, let alone changing their size and placement often. I'm also kind of divided on the Hulk dogs, which were kind of cute (and reminded me of the dog in The Mask when he got the title mask on his face), but also... I mean, Hulk poodle? Although somehow getting Poodle Hulk in the next season of She-Hulk would be a gas.
posted by Halloween Jack at 9:40 PM on October 19, 2022 [2 favorites]

I was curious what Film Critic Hulk had to say about this movie. Unfortunately and unsurprisingly, that's hard to search for.
posted by adamrice at 10:02 AM on October 20, 2022 [1 favorite]

I liked this movie, and a mountain of comics nerds can’t dissuade me from liking it.
posted by Thorzdad at 3:06 PM on October 20, 2022 [2 favorites]

It's good! but from the era when he was still doing the ALL CAPS BIT so a little hard to read! but still:

BANNER WAS BASICALLY TORMENTED DAILY. HE COULDN'T HELP BUT BE INVOLVED. TO BE KIND. TO BE A KIND OF HERO THAT HAD NOTHING TO DO WITH TURNING GREEN. AND AS A RESULT HE GOT IN SITUATIONS WHERE HE HAD TO PUT HIMSELF AT RISK. WHERE TURNING INTO THE HULK WOULD ACTUALLY BE BAD FOR HIM. THEY KNEW HOW TO GET YOUR AFFINITY AND EMPATHY. AND THAT'S WHAT MADE YOU INVESTED.

BANNER SHOULD BE THE LAST PERSON EVER THAT YOU WANT TO BE STUCK WITH THE HULK. THE AUDIENCE HAS TO UNDERSTAND THAT ON AT LEAST A SUBCONSCIOUS LEVEL. THEIR MINDS MAY NOT BE ABLE TO WAIT FOR THE HULK-OUT, BUT THEIR HEARTS MUST SECRETLY WANT HIM TO BE HAPPY AS BANNER.

AND AS FILMMAKER TAKING ON THE HULK NARRATIVE, YOU HAVE TO REALLY WANT IT TOO.

I liked this movie, and a mountain of comics nerds can’t dissuade me from liking it.

this movie takes wild visual swings in an era when "comic book movie" did not have nearly the definition of scope and texture that MCU + Nolan gave it. it is a defiantly, unrelentingly morose movie that allows Banner to be exactly as upset as he should be, and that makes Hulk simultaneously sympathetic and dangerous to the point of being impossible to classify as a "superhero" in any traditional sense (the ending beat is a little copout on this front but that's OK)

Banner's relationship with his abusive father is a really good frame for understanding his psychological trauma in general and for making the Hulk/Banner dynamic into simultaneous literal and metaphor, and this movie mines it as well as it can without getting into territory that it would never possibly have been able to get away with.

the CGI is actually still astonishing in many respects, even where it's dated. the attention to making Hulk look not just "realistic" but expressive creates beautiful moments of quiet. this movie's Hulk is savage, childlike, but also confused and contemplative about his situation, and conveys this without a word anywhere except in a dream sequence

it also has a ton of tonal missteps and goofiness and the script is an like a factory that manufactures very stupid peripheral characters; I think these things are supposed to contribute to a "comic book" feel but in retrospect they're unnecessary concessions to things no one actually wanted. that's a shame. but this movie still rules
posted by Kybard at 8:14 PM on October 20, 2022 [2 favorites]

I'm glad to see support for this movie, because I saw it twice a long time ago and remember it very fondly. I never understood why it's been received so poorly. I feel like it works both as a fun superhero movie, but also uses the whole Hulk character and setting to tell a meaningful story about trauma and anger management.
posted by Alex404 at 1:28 AM on October 21, 2022 [1 favorite]

I see this movie similarly to Jackson's Kong in that there's a good or even great movie that's hidden by too much run-time. It just went on so long that I got pretty antsy in the theater watching this; I can imagine that you could have cut it down to 110 minutes without losing much.

I did like how Lee really tried to make it look like a comic book. I miss Marvel movies having some visual flair or innovation.
posted by octothorpe at 5:13 AM on October 21, 2022 [1 favorite] 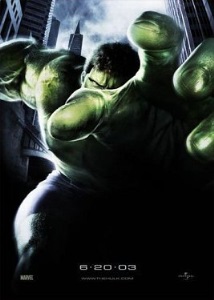