After record producer Swan (Paul Williams) steals the music of songwriter Winslow Leach (William Finley) and gives it to one of his bands, Leach sneaks into Swan's offices. Catching Leach, Swan frames him for dealing drugs, which lands him in prison. After Leach breaks out and again attempts to sabotage Swan's empire, an accident crushes his face. Leach then dons a costume and becomes the Phantom, intent on ruining Swan while saving singer Phoenix (Jessica Harper) from a terrible fate. A horror/fantasy musical by Brian De Palma, with songs by Paul Williams.

Currently available for digital rental in the US on multiple outlets. JustWatch listing.
posted by DirtyOldTown (5 comments total) 1 user marked this as a favorite
It is truly a bizarre - but entertaining! - movie. I don't know how Paul Williams rates as a record producer in such a movie, but...admit I'm stumped over choosing someone else.
posted by davidmsc at 1:51 PM on October 25, 2022

Such fabulous cheeze. It predates the film Rocky Horror Picture Show, although the original stage musical came out in 1973. It's really got the same sort of feel to it, though.
posted by rmd1023 at 3:32 PM on October 25, 2022

The Phantom of the Paradise is excellent, and that's all there is to say about that. Yes, it's campy and crazy and doesn't make a whole lot of sense, but if you can see this movie and not love it, well, I'm sorry, but... I don't want to know you.

Anyway, there is one aspect of the film that has always puzzled me. In the epic musical number Somebody Super Like You (Vimeo link) the band does that thing where they go out to the audience and start cutting off parts of people's bodies to assemble them into Beef, the glam rock monster. I've never really understood how literally we're supposed to take this. I tend to think it's meant to be seen as pure theatrics - after all, the body parts are obviously fake, and we know from context that the parts aren't literally being used to make Beef. He was already alive in the previous scene, bitching and preening around. So, no magic.

But! The way the scene is shot, it almost seems like we're supposed to think the band is actually maiming people, and the cut-off arms and heads magically turn into doll parts once they're removed. We see these people looking normal, and then they get slashed, and suddenly a part of them is being taken away and it's made of plastic. (Like the girl's hand. It's a real hand... until it isn't!) There is a lot of crazy magic in the movie, with people literally selling their souls for rock n' roll. And Swann, the band's satantic manager, makes it quite clear in the film that he thinks onstage death makes great entertainment.

As I see it, there are a few possibilities for how we're meant to take the maimings in this musical number.

A) Pure stagecraft. The people in the audience are plants, with fake heads and fake arms that the band cuts off. The fact that these body parts seem real until they are cut off is just an artsy choice from director Brian De Palma.

B) Black magic. These people innocently went to see a rock show, and they ended up having their bodies cut up and turned into doll parts.

This thread doesn't seem to be taking off the way I'd hope, but I hope some of my fellow Phantom fiends will offer their theories!
posted by Ursula Hitler at 3:05 AM on October 26, 2022 [1 favorite]

Since it's a parody of Alice Cooper I suppose it should be taken in the same spirit as his chicken-biting antics. That said, I just realised that everything I know about Alice's seventies stage show comes from a couple of paragraphs in Tony Palmer's All You Need Is Love, a character in Howard the Duck (a villain maimed in a Shock Rock incident - Dr Bong, I think) and, um, this. Given that it's obvious that all Swan's bands are the same group in different costumes I've always assumed it's all fake, until it isn't (at which point everyone is so into the artifice that no one notices).

This is one of those films I've seen so many times it might as well be an infinite number. I often wake up on Thursday with Swan's voice telling me what day it is ("Thursday. Today is Thursday, Winslow").

I just want to make a special mention of Jessica Harper's voice, which is the most amazing thing, and only really features in this, Shock Treatment and a couple of albums for children (not really my thing). It must be very curious for her to have a lengthy career that's only remembered for a well-known campy musical, an enormously obscure campy musical and a giallo classic.

Oh, and Winslow's cell is TONTO out of Tonto's Expanding Head Band.

Anyway, this is my favourite movie about the music industry.
posted by Grangousier at 4:08 AM on October 26, 2022 [1 favorite]

Of course, there's always Wikipedia. Dr Bong it is: "Originally a journalism student whose yellow journalism got his professor fired, his hand is severed by a miniature guillotine when performing with the punk band Mildred Horowitz. This is a big factor in his becoming the villain Doctor Bong. "
posted by Grangousier at 4:13 AM on October 26, 2022 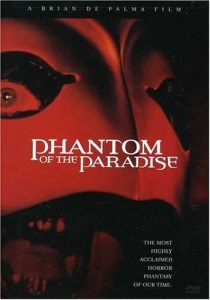