A federal agent uncovers lucrative toxic waste dumps in Appalachia and must deal with the locals who want to keep their 'gold mine' secret.


When an EPA representative is discovered dead in a small Midwestern town, government agent Jack Taggart (Steven Seagal) goes undercover to check things out. He finds that local coal mogul Orin Hanner Sr. (Kris Kristofferson) is cutting financial corners by disposing of hazardous waste wherever he pleases and that local kids are falling ill because of this recklessness. Taggart then works to stop the shady activity and save the town, but Hanner and his thugs soon grow suspicious of him.

Judith Egerton: "Fire Down Below" is an action film that's deadly slow and stupid -- like most of the mountain people portrayed in the film.

Okay, you get the picture. I disliked 90 percent of this movie and I'm glad I didn't pay to see it.

But what I did like was this: Several beautiful images of the mountains; musician-actor Levon Helm as a preacher; country singer Randy Travis in a cameo as a villain; Helgenberger, who does her best to make her role more than a comic-book character; and Kentucky native Harry Dean Stanton, who plays a backwoodsman with unoffensive authenticity. He's easily the best actor and the most redeeming aspect of Seagal's movie.

Melissa Morrison: There are two ways to view Steven Seagal's latest fist fest, "Fire Down Below." First is as a by-the-numbers actioner that hits most of its marks, including a juicy justification of a plot (scummy corporate type stores his chemical waste in abandoned mines, sickening an Appalachian town's children), strong supporting characters ("Species'" Marg Helgenberger as the town outcast, Harry Dean Stanton as a sage bumpkin, and raisin-faced Kris Kristofferson doing his "Lone Star" villain, this time in pinstripes), and spectacular (if chaotic) scenes of destruction.
The Seagal/Nasso production even gets some country authenticity thanks to appearances by Travis Tritt and Randy Travis, among others. The second way is even more fun: "Fire Down Below" as a God vs. the Devil scenario in which Seagal casts himself as the ultimate justice-doer--a pursed-lipped, pony-tailed, leather-blazered version of the Almighty. Seriously. When Seagal's character, undercover EPA agent Jack Taggart, first arrives in Jackson, Ky., in the guise of a church handyman, he tells the townsfolk that he's doing "God's work." From there on, references to heaven and hell fall like frogs during the Apocalypse. ("Fire down below," geddit?)

Madeleine Williams: Seagal doesn't have to discover this. In a brief prelude before the opening credits, he is informed of every significant plot development. It is as if the film recognizes that plots are irrelevant in a Steven Seagal film, and as a pesky nuisance does away with all of it at the earliest possible convenience.

What's left for the rest of the film is Seagal beating up on Hanner's redneck henchmen. Of course, as Seagal goes to extreme lengths to explain, most Kentucky people are good folk, and only the aberrant few are evil rednecks. And it is only with those few that Seagal wipes the floor.

The only character in Fire Down Below who has more than a single dimension is Sarah Kellogg (Marg Helgenberger), the town outcast to whom Seagal takes a liking. And though her family troubles are a little contrived, compared to the numbing blandness that fills the village of Jackson, she stands out.

Seagal, for his part, has given up any and all pretense at acting. He wanders around with his one facial expression: an arrogant, knowing smirk. His action scenes are so one-sided that nobody in the film ever lays a finger on him. It gets boring. In most movies, the fix is in...you know the good guys are going to win, but at least they do their best to pretend otherwise. Not so in Fire Down Below.

Trailer
posted by Carillon (5 comments total)
I think this might have been the first movie I saw with Harry Dean Stanton? It might be close between this and Pretty in Pink, but I think my mom showed me that after I saw this.

Also, is this the only movie that has an EPA agent as a law enforcement hero? I imagine there might be one or two other movies, but this is certainly unique to me.

It's not great, and the scenes I thought were pretty cool as an 11-year old are pretty cringey now, but it's certainly a lot of movie, with a whole bunch of plot crammed in and then disregarded.
posted by Carillon at 4:06 PM on October 25, 2022

This was the last Steven Seagal movie I could justify enjoying ironically.
posted by rikschell at 4:11 PM on October 25, 2022 [1 favorite]

Wait! Isn't this the one where Seagal shows us yet another side of his renaissance manliness by singing and playing guitar?
posted by biffa at 4:12 PM on October 25, 2022

If you've ever played that movie game where you and your friends say movie titles that could, entirely unmodified, be for movies about poop... this one will bring the house down.
posted by DirtyOldTown at 2:02 PM on October 26, 2022 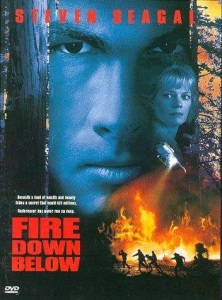