If you live near a Regal Cinema, you have a chance over the next 2-4 days to see the rarely seen in theaters Real 3-D version of this film. This is the full-on Avatar-style conversion that was announced in 2008, but didn't finish until 2016, and only played a handful of fests. It was supervised by members of Romero's own team at his request. Disgusting Tom Savini FX, in 3-D. YAAAAAAAAAS.


As hordes of zombies swarm over the U.S., the terrified populace tries everything in their power to escape the attack of the undead, but neither cities nor the countryside prove safe. In Pennsylvania, radio-station employee Stephen (David Emge) and his girlfriend, Francine (Gaylen Ross), escape in the station helicopter, accompanied by two renegade SWAT members, Roger (Scott Reiniger) and Pete (Ken Foree). The group retreats to the haven of an enclosed shopping center to make what could be humanity's last stand.

Very briefly playing in theaters this weekend. Not currently streaming in the US. JustWatch listing.
posted by DirtyOldTown (9 comments total) 1 user marked this as a favorite
This is the one and only horror post I will be adding to FF today, because I'm just that excited about it. I will pop in by tomorrow with a review of the Real 3-D version.

If you haven't seen this, this is, all at once, a bloody, intense zombie movie that prefigures most of the subgenre to come, a searing sociopolitical satire, a very black comedy, and a survival epic.
posted by DirtyOldTown at 11:18 AM on October 28, 2022 [1 favorite]

Love this one! I have tickets Sunday. Is it underrated? Certainly was a while ago but I think people have come around.

I hope this theatrical release leads to a new blue-ray release; this film has been hard to get.

This film is a big favorite of mine; I love how slow the middle is and how bleak the ending is.
posted by octothorpe at 5:19 AM on October 29, 2022

This was so much fun. People love turning up their nose at horror and at 3-D so I hesitate to share my real feelings on this because people are going to shit on this, but...

Real 3-D was not used in this case to provide an immersive experience that would make you reconsider the original film.

Real 3-D was used in this case to hammer home the gore gags in a way that would delight nerds that read Fangoria. It was used to make a better, more satisfying version of the kind of experience people had watching Friday the 13th III in 3-D.

So I guess what I am saying is, if you don't want eyeballs flying at you and head spray headed your way after a zombie is shot in the head, FUCK OFF, NERD, NOT EVERYTHING IS FOR YOU.

It was not done in a way that undercut the movie, which still works as a horror film, as a story, as a satire, as a commentary on consumerism and mankind as its own worst enemy. But the gags (and I'm using gag not specifically to mean "joke" but to refer to a gore effect, as is a genre custom) all got exclamation points.

A solid and hugely fun zombie movie so my nose stays down on the horror aspect, but remains firmly turned up at wearing sunglasses in a movie theatre - - I'll stick with the nice bright 2D version.
posted by fairmettle at 8:03 PM on October 29, 2022

My wife and I went to see this Saturday night with a small horror movie group. It was lots of fun. I had only seen it once before a year or so ago (not being able to find it on streaming I actually watched the youtube version that Halloween Jack linked to) and getting to see it on the big screen was great. Even my wife, who is not a horror fan but humors me from time to time, enjoyed it.
posted by Captain_Science at 8:29 AM on October 31, 2022 [1 favorite] 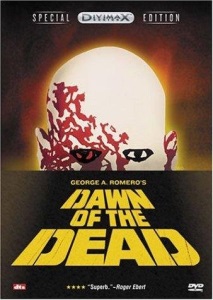