A machine from a post-apocalyptic future travels back in time to protect a man and a woman from an advanced robotic assassin to ensure they both survive a nuclear attack.


The first Terminator movie to not be directed by James Cameron, and the first to star Claire Danes, it's sitting at 69% on Rotten Tomatoes.

Roger Ebert went with 'dumbed down for the multiplex hordes.'

Blogger Tim Brayton calls it 'one of the definitively bad sequels of all time.'

(Not to editorialize, but I don't think it's that bad.)

(In a very Cameronesque detail, portions of the movie were filmed in the decommissioned bunker underneath The Greenbrier in West Virginia.)
posted by box at 2:14 PM on October 29, 2022 [2 favorites]

There's only one really good scene in the movie, and inexplicably, it was deleted.
posted by Halloween Jack at 2:31 PM on October 29, 2022 [13 favorites]

I didn't like that all of John's lieutenants were the kids he went to high school with. Nepotism isn't good leadership quality.
posted by riruro at 2:56 PM on October 29, 2022 [2 favorites]

The thing that I remember about this movie is that John Connor decided to go completely off the grid - working under the table, using cash, being homeless, leaving no record of his existence, all in hopes of keeping his future adversaries from being able to find him.

...And it worked! Except that he didn't bother to leave the Los Angeles area, and a Terminator on an unrelated mission just happened to bump into him.
posted by Hatashran at 7:13 PM on October 29, 2022 [14 favorites]

Terminator III was doomed from the moment they decided to do a sequel with Arnold, an unnecessary and unwanted sequel.
posted by Stuka at 9:11 AM on October 30, 2022

Although a web search reveals that the term has also been applied to the Saw movies and DC Comics “New 52,” I recall a Cracked article years ago talking about the Terminator movies’ “Jenga tower of continuity” and I have always thought it a perfect description of how shambolic it has become over the last thirty years.
posted by ricochet biscuit at 8:05 PM on October 30, 2022 [1 favorite]

It seems impossible to make a decent Terminator movie after the first two but they keep trying.
posted by octothorpe at 4:26 AM on October 31, 2022

Maybe it’s something like the old Star Trek rule where every alternate one is good. Here the first two are great and all the rest are lousy, but in different ways.
posted by ricochet biscuit at 7:32 AM on October 31, 2022

I think that Dark Fate was decent, if not as compulsively rewatchable as the first two.
posted by Halloween Jack at 8:22 AM on October 31, 2022 [3 favorites]

Wait, is this the one where Skynet became self-aware based on distributed networking across users/devices around the planet, that it then decided to nuke? So - where would that processing power be after the decimation of infrastructure?

Sigh - yeah, I am a nerd. To me, that was a big plot-hole. Just like in the Batman reboot where the key to the nefarious plan [SPOILER not included], which would have caused additional, horrific consequences that apparently no one of any scientific-nature/technical background was consulted with by the scriptwriters.
posted by rozcakj at 8:51 AM on October 31, 2022 [1 favorite]

Oh, I'm sure only Batman would have [spoiler] and would always use it in a proper and judicious manner.

And, yeah, I enjoyed "Terminator: Dark Fate". It was better than this, substantially better than "Terminator Genisys," (which seemed to be more focused on playing with things from the original timeline rather than making a movie and making it good,) and leagues better than "Terminator: Salvation," which was downright nonsensical. Sarah Connor is the heart of the series, and from what I read it sounds like Hamilton turned this down because they weren't doing anything interesting with her character.
posted by rmd1023 at 4:18 PM on October 31, 2022 [1 favorite]

Dark Fate was fine for the non-action scenes but most of the action scenes were just so terrible. Also the new Terminator was pretty boring and forgettable.
posted by octothorpe at 4:42 AM on November 1, 2022

The real bummer of Salvation is that original story sounded cool, but Christian Bale forced a last minute rewrite when he realized he's signed on to play John Connor and Connor wasn't actually the lead.
posted by DirtyOldTown at 7:33 AM on November 1, 2022 [1 favorite]

The film is, well, OK I guess, but sequelitis has definitely set in. I remember sitting in the cinema sipping on my biggulp trough a promotional terminator-shaped straw thinking that it was going to be dumb when during the first few minutes the sexy lady terminator walks naked down the road despite materializing partially inside a clothing store.
posted by AndrewStephens at 7:41 AM on November 1, 2022

DirtyOldTown, you leave out the amazing Sarah Connor Chronicles which ended poorly but were sooooo freaking good.
posted by teleri025 at 3:58 PM on November 4, 2022 [3 favorites]

Wait, is this the one where Skynet became self-aware based on distributed networking across users/devices around the planet, that it then decided to nuke? So - where would that processing power be after the decimation of infrastructure?


Apparently the servers at my company are kept in an underground bunker that can survive a nuclear apocalypse....shit are we creating Skynet?
posted by LizBoBiz at 1:28 AM on November 15, 2022 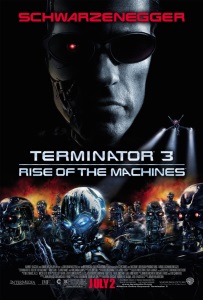