A depiction of the off-screen relationship between the actors who play the newlyweds in the film And Life Goes On (1992).


Abbas Kiarostami takes meta­narrative gamesmanship to masterful new heights in the final installment of The Koker Trilogy. Unfolding “behind the scenes” of And Life Goes On, this film traces the complications that arise when the romantic misfortune of one of the actors—a young man who pines for the woman cast as his wife, even though, in real life, she will have nothing to do with him—creates turmoil on set and leaves the hapless director caught in the middle. An ineffably lovely, gentle human comedy steeped in the folkways of Iranian village life, Through the Olive Trees peels away layer after layer of artifice as it investigates the elusive, alchemical relationship between cinema and reality.

David Walsh: The final shot of the film, which lasts several minutes, is taken from the top of a hill. The camera observes the couple far off in the distance. Due to the length of the shot and the distance of the figures, the spectator's own state of mind begins to waver between consciousness and unconsciousness. One enters something of a dream world. Does the girl finally turn and speak to Hossein? Does he run across the field out of joy or unbearable sorrow? The questions are not important, the real point is what happens off-screen, that life is changed "to fit our dreams."

The treatment of social difference and the weight of longstanding traditions, the careful but unequivocal protest against the conditions of life, the simplicity of the narrative and dialogue, the clarity of the acting—this is the stuff of classical filmmaking. One is in the presence of an extraordinary talent.

Tina Hassannia: Apparently based on actual events that occurred while Kiarostami was filming Life, Olive Trees follows the relentless romantic pursuits of Hossein, a poor, illiterate construction worker, as he attempts to earn the beautiful Tahareh’s hand in marriage. While it appears Tahareh is giving him the silent treatment throughout most of the film, this is not representative of her own feelings but rather due to the conduct Islamic women are beholden to. As noted by Hossein, when the director tries to recruit a peasant girl, women in this part of the country are not allowed to look, let alone speak, to male strangers. Kiarostami gives this cue to the audience in order to understand Tahareh’s supposed cold reaction to Hossein—she is not indifferent to Hossein’s pleas, but must remain silent due to the cultural restrictions imposed on her.

Hossein is one of the most affable Kiarostami archetypes—as stubborn as he is sincere, aware his class prevents him from marrying “up” but refuting the logic of tradition. After being denied Tahareh’s hand by her grandmother, Hossein expresses such a utopian view of the broader implications of his pursuit of Tahareh that one can’t help but sincerely wish the world did work as he says it should.

Rouven Linnarz: Given the nature of the three films of the trilogy named after the village, it is obvious Kiarostami and his team felt a deep connection to the region, its people and its culture. Over the years, the bond must have intensified, embedding the production of the previous two features within the history of the village, considering the various dialogues about “Where is the Friend’s House” between actors. Right from the beginning, when the director, played by Mohamad Ali Keshavarz, breaks the fourth wall, introducing himself to the viewer and explaining what the movie will be about, Kiarostami emphasizes the story of “Through the Olive Trees” which is about this specific connection, the role of art, or film, to be precise, in overcoming or dealing with the wounds of the past. As with many others of Kiarostami’s features, the landscape again plays a distinct role in that regard: on the one hand, an image of the destruction caused by the earthquake, but on the other hand a metaphor for emotional turmoil and hardships people such as Hossein and Tahereh had to go through, thus creating a certain distance towards the past and the loss of one’s dreams.

Trailer
posted by Carillon (1 comment total) 2 users marked this as a favorite
I really liked this one! I'm still pretty surprised that Kiarostami resisted calling these a trilogy. Given that there's a movie about making a movie, about making a movie, there's a very direct connection between the three films. Mrs. Shiva was really great, I loved how she ribs the other people in the production, and is able to carve out space.

I'm really not sure how this movie would play if you haven't seen the other two. For me it very much felt resonant and a culmination of the 'trilogy', but I guess I could see it being quite odd if you didn't have the grounding of the first two. When it works the best is showing the process of crafting the movies, and how much of the chaos exists.

Not being from Iran I was curious if we're supposed to see Hossein as unwelcome in his persistence. It's very much a lot, and from a more Western POV it felt potentially off-putting, especially given her total, (stony) silence. But in reading reviews it seems like it's welcome, or at least required for Tahareh to be able to extend her own voice? Definitely fraught, and not something I feel comfortable having an answer for, but was interesting to think about and process during the film.
posted by Carillon at 3:50 PM on October 31, 2022 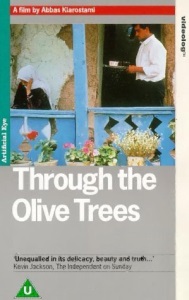