Despondent over a painful estrangement from his daughter, trainer Frankie Dunn (Clint Eastwood) isn't prepared for boxer Maggie Fitzgerald (Hilary Swank) to enter his life. But Maggie's determined to go pro and to convince Dunn and his cohort to help her.

Directed by Clint Eastwood. Screenplay by Paul Haggis, based on Rope Burns: Stories from the Corner by F.X. Toole.

Currently streaming free with ads in the US on Tubi. Also available for digital rental on multiple outlets. JustWatch listing.

Today, I'm going to post a bunch of movies that are problematic and/or made by/starring problematic people, but also either: have merit/are acclaimed; won some awards; are very popular; have a certain amount of cultural cachet. I'll be tagging these #problematicmovies.

This film drew criticism from some disability rights activists who protested the ending. The Disability Rights Education Fund released a statement about the film in February 2005 that included the following:

Perhaps the most central stereotype fueling disability prejudice is the mistaken assumption inherent in the message of the movie that the quality of life of individuals with disabilities is unquestionably not worth living. This stereotype is contradicted by the personal experience of many thousands of people with significant disabilities in this country and around the world who view our own lives as ordinary and normal. It is further contradicted by plenty of hard data. Research overwhelmingly shows that people with disabilities find satisfaction in our lives to the same degree, or greater, than does the general public.

The Chicago Tribune reported that protests against the film by disability activists occurred in Chicago, Berkeley, and other cities, and that Clint Eastwood had previously lobbied for weakening provisions of the Americans with Disabilities Act.

Not for nothing, but Morgan Freeman is pretty much trash also.
posted by DirtyOldTown (1 comment total) 1 user marked this as a favorite
(Warning, gross language from audience creep.) When I saw this in the theater, some guy was muttering during the movie and rustling bags, and it was awkward and annoying but no one said anything. Along came the scene where the relatives convince Swank's character to sign a paper. The guy snerkled and said, "She can sign it with her pussy!" This caused a woman from the back to say, "What the fuck is your problem!?" and he shuffled out immediately. I've thought about this situation (my own timidity; the fact that he was behind me; fear of bullies; the power of shame; etc) more than anything in the movie.
posted by fleacircus at 7:10 PM on November 1, 2022 [1 favorite] 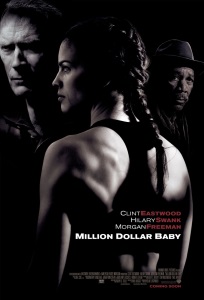