Uncle Remus draws upon his tales of Br'er Rabbit to help little Johnny deal with his confusion over his parents' separation as well as his new life on the plantation.

Emphatically not commercially available from Disney, but preserved on the Internet Archive.

Today, I'm going to post a bunch of movies that are problematic and/or made by/starring problematic people, but also either: have merit/are acclaimed; won some awards; are very popular; have a certain amount of cultural cachet. I'll be tagging these #problematicmovies.

This one is racist in an insidious, relentless way, pulling from minstrelsy and depicting recently freed Black slaves as kindly old Magical Negroes.
posted by DirtyOldTown (17 comments total) 1 user marked this as a favorite
"Zip-A-Dee-Doo-Dah" is a marvelously catchy song, and the animated segments have some charm, even as the exaggerated patois the animals speak in is offensive in and of itself.

I suspect Disney doesn't want to fight harder for this simply because it isn't that good. The live-action sequences aren't just racist, they're deadly boring.
posted by DirtyOldTown at 2:43 PM on November 1, 2022 [4 favorites]

When I was at Disney World quite a few years back, I heard Zip-A-Dee-Doo-Dah" as one of the songs during a parade and couldn't help but wonder how many kids wondered "huh, what movie is this from?"
posted by rmd1023 at 3:38 PM on November 1, 2022 [3 favorites]

Growing up my brother and I had many Disney records. For the non-olds among you these were one or two lp's with watered-down highlights of a Disney movie. The record jacket had a book of sorts build in (or maybe they were separate?) so you could follow along with the story/songs. "Turn the page when you hear Tinkerbell's magic wand."

I suppose my brother and I mostly liked the songs but at 5 or 6 we thought the story chavenet refers to was hilarious. Ugh. Though being sort of a wet blanket as a kid I also thought Br'er Rabbit was a troublemaker and wasn't a huge fan overall.

In the late 70's/early 80's when Disney was re-releasing movies in theaters one of my aunt's took us to all of them including this one. We were a little older and I definitely remember it being boring but don't recall talking about it at the traditional McDonalds stop after the movie.
posted by sevenless at 3:48 PM on November 1, 2022 [4 favorites]

My grandmother took me to this. Pretty sure she fell asleep during it. I remember very little about it -- I couldn't have been older than nine or so.

Say whatever about kids these days, I think a lot of them would sideeye or outright reject this movie. I didn't. I'm not proud of that.
posted by humbug at 4:07 PM on November 1, 2022

I remember seeing this as a kid, don't really remember much about it, but an older relative has always had a soft spot for the movie because of childhood nostalgia. We talked about it recently when they made some wistful comment about it and I reminded them how horrifically racist it is. They stopped and murmured "was it? Yes, yes I guess it was. Huh"

Amazed it took Disney this long to retool Splash Mountain. They definitely want to push that one way out of public memory. The "You Must Remember This" series on SotS was pretty good for showing that even at the time it was considering pretty awful and an attempt to cash in on Gone with the Wind
posted by drewbage1847 at 4:07 PM on November 1, 2022 [8 favorites]

I do remember seeing this when Disney (I think?) put it back in theaters in a repertory thing as they did with other movies. This was maybe ... '86 or '87? I don't specifically remember. I remember liking parts of it but also understanding even at that age (like 6-7) that it was a product of another time (although, looking back, not long enough ago) and still racist.

The Brer Rabbit stories were supposed to be African folktales except ... here, they weren't really at all. At least not as they were presented here.

I have had younger friends (like 10 years younger than I am) who've watched this and they've ... found it offensive in a cultural artifact way, which I agree with. It's an interesting piece of history but it's also not one you can really put enough disclaimers on. It was always a racist mess. It has charming parts but those don't make up for the intentions of the rest of it.
posted by edencosmic at 5:47 PM on November 1, 2022

When I was at Disney World quite a few years back, I heard Zip-A-Dee-Doo-Dah" as one of the songs during a parade and couldn't help but wonder how many kids wondered "huh, what movie is this from?"

I have vague but definite memories of Disney using this as general theme music for the brand; Wikipedia confirms that Wonderful World of Disney? had it as part of their opening medley. (The wiki also notes people who covered it, including, holy crap, the Dave Clark Five.) I wasn't that fond of the movie itself, but just kind of accepted it as part of general popular culture (the wiki also notes that one of the most successful re-releases was in 1972, which was probably when I saw it) in the same way that I accepted some of the songs that we did in music classes in school as "folk songs" only to find out later that they were minstrel songs. Kind of odd how that sort of thing kept being promulgated even in an allegedly progressive era; it wasn't just in the south that old times there were not forgotten.
posted by Halloween Jack at 6:03 PM on November 1, 2022 [1 favorite]

I saw it at the drive-in during a re-release when I was a small child, and rewatched it a few years ago. Aside from a couple of the songs being pretty catchy, and the innovation of the live-action/animation sequences (which were done much better in Mary Poppins and Bedknobs and Broomsticks) it's a real clunker of a movie. I'm convinced that the controversy (i.e. white people wanting to be openly racist in the name of "free speech") is the only thing that's kept people interested in it over the years instead of letting it fade into well-earned obscurity.

When I was at Disney World quite a few years back, I heard "Zip-A-Dee-Doo-Dah" as one of the songs during a parade...

From the Department of Stupid Shit White People Do When They Ought to Know Better, I once danced the cakewalk down Main Street, USA when "Zip-A-Dee-Doo-Dah" came over the PA. Back when I had two functional knees and no shame. I first learned the song in my primary school choir.
posted by The Underpants Monster at 7:02 PM on November 1, 2022

The You Must Remember This podcast did a series on this film that was definitely worth a listen.
posted by EmpressCallipygos at 7:06 PM on November 1, 2022

My parents would take me to see every Disney movie when they were re-released in theatres in the 1980s, but my mother absolutely forbade me to see SotS in a way that told me it was bad news. (This was around the same time I learned the n-word in an innocuous context that I repeated to my mother, who slapped me and emphatically told me never to use that word again.)
posted by pxe2000 at 6:14 AM on November 2, 2022 [1 favorite]

I have a faint memory of watching some of this in like 1983, when we didn't have a VCR, so it must have come on TV or cable. Maybe it's a false memory, because I was a tiny child, but I feel sure I watched the part about the t-- b---. I add this because if it's true, then Disney did not bury it as thoroughly as it likes to pretend. Certainly not with "Zip-A-Dee-Doo-Dah," which was all around the place as an innocuous kids' song at the time.

I wonder if Walt Kelly worked on this. He did animate for Disney for a time, and it has occurred to me that maybe Pogo, a strip I love dearly, is Not Okay. I had better look into it.

I once danced the cakewalk down Main Street, USA

They had a cakewalk at the grade-school festival that my school held every year to fundraise. Not cool, man. Hope they don't still do that -- the place has barely changed.
posted by Countess Elena at 7:00 AM on November 2, 2022

i had the "long playing story record" as a kid and listened to it a lot. I probably can sing most of the songs still, and some spin up as ear worms to this day. I think I saw the full movie as a kid and saw the animated bits every now and again. At the time I didn't realize the racial issues with the film, but i was just a kid. I did see the moving again in College and was able to understand why it was such a problematic film. Best to let it fade away i think.
posted by jazon at 8:04 AM on November 2, 2022

They had a cakewalk at the grade-school festival that my school held every year to fundraise.

Well, "cakewalk" can refer to two different things. The kind of cakewalks I've seen at county fairs and school carnivals are just walking around in a circle and whoever ends up on the lucky number when the music stops wins a cake. Then there's the high-stepping dance invented by enslaved people and then appropriated by white people and associated with minstrel shows.
posted by The Underpants Monster at 8:53 AM on November 2, 2022 [1 favorite]

This post reminded me of Marlon Riggs's work, so: great day to start posting about some of those (starting with Ethnic Notions).
posted by johnofjack at 3:03 PM on November 2, 2022

Gotta admit, I really thought Disney would've re-released it after Trump was elected. Surprised that they didn't.
posted by Jessica Savitch's Coke Spoon at 6:36 PM on November 2, 2022

I'm convinced that the controversy (i.e. white people wanting to be openly racist in the name of "free speech") is the only thing that's kept people interested in it over the years instead of letting it fade into well-earned obscurity.

I would say the lion's share of the credit for this goes to Splash Mountain, actually, with some credit as well to the simple fact that this is one of a very very small number of old movies that Disney appears to be unwilling to make money off of anymore. I always sort of expected that they'd eventually release a remastered Song of the South in one of those fancy "Disney Treasures" DVDs in the metal boxes with an intro from Leonard Maltin about how of course the film is a product of its time and Disney would never condone it nowadays, etc etc, make it limited edition and sell it at fan conventions only at a cool $45 a pop. Genuinely surprised they didn't go there. But the fact that Disney didn't makes people think this must be something really beyond the pale. Most people's experience of Disney is that anything can be had for money. So why not this movie?

I watched it on YouTube in college to see what all the fuss was about. My conclusion was that it just isn't a good enough movie for Disney to be willing to go to bat for it as a classic worthy of study despite its flaws.
posted by potrzebie at 7:23 PM on November 6, 2022 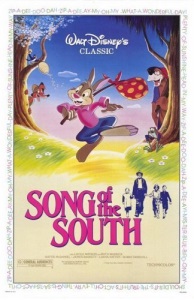