When a research ship is sent to explore an island thought to be rich in oil, paleontologist Jack Prescott (Jeff Bridges) sneaks aboard, having heard strange rumors about the island. En route, the crew rescues Dwan (Jessica Lange), the sole survivor of a shipwreck. When they arrive, they find native people living in fear of a monster called Kong. The natives kidnap Dwan and sacrifice her to what turns out to be an enormous ape. Dwan is eventually rescued, and the ape captured for a gala exhibit.

Currently streaming in the US on Amazon Prime, Paramount Plus, and Epix. JustWatch listing.
posted by DirtyOldTown (10 comments total) 1 user marked this as a favorite
I was so sure that this was the "good" King Kong, because it was newer and in color. I fell asleep watching it on HBO, getting little more out of it than a lifelong crush on Jessica Lange.
posted by DirtyOldTown at 10:05 AM on November 2, 2022

hmmm...I don't think I have seen this one

Isn’t this the one that used the World Trade Center towers instead of the Empire State Building? I was a kid when I saw it on tv, before I’d seen the original, but I think I remember that.
posted by Occula at 3:49 PM on November 2, 2022 [1 favorite]

I never saw it as a kid; never tried to see it as an adult.
Yet as a kid, I had the board game.
posted by Mutant Lobsters from Riverhead at 6:13 PM on November 2, 2022

Saw this in the theater when it came out. I was very excited to see it and even as a 12 year old, it was not good. Rick Baker is great as Kong but the effect are in general worse than the 1933 version and the action sequences are pretty lame.
posted by octothorpe at 9:25 AM on November 3, 2022

I've never seen the movie, but the poster is seared into my 8-year old brain.
I never want to see this movie, because there's no way it could live up to that.
posted by bjrubble at 6:37 PM on November 3, 2022 [2 favorites]

the release of the 1976 version resulted in a plethora of 25 cent gumball machines featuring crudely molded rubber reproductions of King Kong gripping a damsel.. anyone remember this?

young me went apeshit for these things, it was like ur-Pokemon of the same shitty replica King Kong

I'm with bjrubble, that promotional poster did some serious voodoo to my brain at the time
posted by elkevelvet at 2:06 PM on November 4, 2022 [1 favorite]

I really have to say, the John Barry score really dates the film. I keep thinking I'm watching James Bond vs. King Kong.
posted by mikelieman at 5:20 PM on November 11, 2022 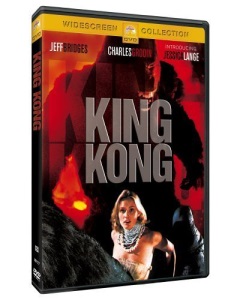