Two years have passed since the battle at the end of Season/Book 3 (Sun) but Aaravos's plans are far from thwarted. Like previous seasons, Book 4 has nine episodes. The first episode, Rebirthday, was released free on youtube a bit ahead of the rest of the season.


The princes (now King and High Mage) have grown in the two years and have new character designs. We meet a new recurring character, Terry, Claudia's earth elf boyfriend. We follow Aaravos' pawns, Claudia, Viren, Terry, and a strange creature on a quest to free the fallen star elf. If they fail, Viren's resurrection will fail after 30 days. In parallel, Ezran, Callum, Rayla, Soren, and Zim work to thwart them, which takes them back through Xadia. Back at the border of the human kingdoms, human and sun elves struggle with the aftermath of the destruction of Lux Aurea, while Amaya and Janai navigate their engagement and the pressures of Janai's rule.
posted by Karmakaze (7 comments total)
I don't know when I'll get around to watching this, but I'm rather excited that it's back. I thought the first three seasons told a very well crafted story. I also like the idea that everyone's aged up a little.
posted by Alex404 at 9:58 AM on November 5, 2022

Just finished watching the season! Still really liking this show. And yay for them introducing a trans character!

This season had a lot of buildup, but I didn't mind the somewhat more leisurely pace. I appreciated that the solution to the issue with Janai's brother was "duels are stupid", I liked the Avatar in-joke I caught, and I'm definitely on board for the unfolding story.
posted by kyrademon at 12:13 PM on November 13, 2022

I started in on this yesterday, and 2 episodes in it's looking really good.
I wasn't super sure how much I didn't remember and how much happened during the last two years, but I'm going along for the ride.
posted by Acari at 12:14 PM on November 13, 2022

I did get a kick at the callback that earth elves actually do say "Trees to meet you."

Terry is an interesting character. I was 'spoiled' ahead of time that Terry is a transman still in transition so I am not sure if a viewer would catch the cues without already knowing. He does come out to Viren about halfway through the season in a blink and you'll miss it bit of dialogue. There's clearly magic rather than science assisting the transition and his 'vest' does resemble a binder. We don't find out how he and Claudia connected this season, though he is clearly smitten. He's clearly gotten past the Xadian rejection of blood magic but he's still serving as a check on her path down the road of cruel pragmatism her father laid for her.
posted by Karmakaze at 5:50 AM on November 18, 2022

Each season is only nine episodes, weird as that feels.
posted by Karmakaze at 6:30 PM on November 22, 2022 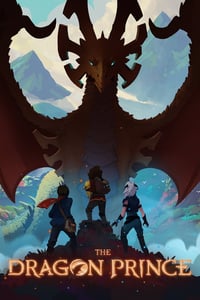