A comet is discovered to be on a collision course with Earth. As doomsday nears, the human race prepares for the worst.


A comet is hurtling toward Earth and could mean the end of all human life. The U.S. government keeps the crisis under wraps, but crack reporter Jenny Lerner (Tea Leoni) uncovers the truth -- forcing U.S. President Beck (Morgan Freeman) to announce his plan. Grizzled astronaut Spurgeon "Fish" Tanner (Robert Duvall) and his team will land on the comet and lay explosives, hopefully deterring the object from its doomsday course. If not, humanity will have to prepare for the worst.

Danielle Solzman: When one looks back at the film, you can see how much cable news has changed in two decades. If this film were made today, Lerner wouldn’t have given the president a chance. She’d have broken the news before the White House had an opportunity to get in front of it. Yet when it comes to saving her life, she gives up everything to be there with her father, Jason Lerner (Maximilian Schell), when the moment arrives.

I’m not going to question the science behind the film but Deep Impact brings a more realistic feeling. Because of all the landmarks, it makes since to show New York getting battered by the tsunami. In spite of the disaster that got butts in seats, Leder’s film focuses on the human emotion at hand. This is what makes the film able to stand apart from the other asteroid film of 1998.

Rita Kempley: An alarming scenario, surely, but one that hardly registers on the multitudinous cast of the plodding disaster drama "Deep Impact." These folks are so blase, you'd think that scientists had predicted pennies from Heaven instead of world's end within the year.

So what do they do now?

At the very least, you'd think they'd stock up on canned goods. But the listless characters of this mirthless $80 million drama don't do much of anything to save themselves – unless watching MSNBC counts. Apparently the cable network's droning news anchor Jenny Lerner (stiff, silly Tea Leoni), who first broke the story, has won the hearts and minds of the sleepy people.

Lisa Alspector: It should have been easy to manipulate our emotions with this story about a comet on a collision course with earth—the idea of humans facing extinction has been successfully exploited often enough. But Michael Tolkin and Bruce Joel Rubin’s straightforward script and Mimi Leder’s toneless direction make this attempt so boring that the titles counting down the months, weeks, and finally hours to impact are best used to gauge how soon the movie will be over.

Trailer
posted by Carillon (4 comments total) 3 users marked this as a favorite
This was an interesting one. At the time, I remember the romance, such as it was, between LeeLee Sobieski and Elijah Wood dominating my own process around the movie. Granted I was a kid, but it was what I remembered most. Also too the sense of passivity and malaise. Now given the covid response, all zombie and disaster movies are laughable, and this one fits the bill. I remember being angry about both the kids giving up their place in the bunker, and that Tea Leoni's character would give up to reconnect with her shit bag father.
posted by Carillon at 12:32 AM on November 6, 2022 [1 favorite]

I always liked this far better than Armageddon. It's corny and melodramatic, but I'll take its pass-the-tissues earnestness over the other film's "No, seriously, this is REAL science [SILLY GIBBERISH ARGLEBARGLE SMASH CUT]" vibes any day.
posted by DirtyOldTown at 6:31 AM on November 6, 2022 [6 favorites]

Deep Impact is a favorite, for no other reason than Thomas Beck is my favorite fictional POTUS. Morgan Freeman oozes confidence and competence in the role. As for the movie itself, I have dreamed about it having been made as a TV miniseries instead of a movie, to give the story and characters some time to breathe. And in my wildest dreams, Deep Impact is part one that leads into something along the lines of The Road.
posted by Stuka at 8:49 AM on November 6, 2022 [1 favorite]

I've said it before on the blue: The real, unforgivable sin of this film was telling us that the big spaceship had an 'Orion' drive, and then the ship not having an Orion Drive.

A nuke-riding ship taking off out of the Nevada desert could have been a special-effects sequence for the ages.

I guess I'll just keep waiting patiently for the Footfall movie.
posted by Hatashran at 12:16 PM on November 6, 2022 [2 favorites] 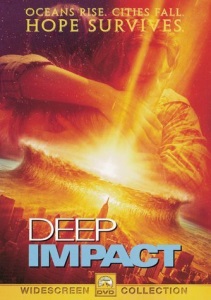