A group of people without a lot in common--only some of them are super, only a couple are friends--are asked to get together to deal with the oldest one's brother, who has stolen a cube.


In the spirit of the rampant completionism that has thrived on the purple recently, I thought that I'd post this up, even though it's about a demi-year or so past the tenth anniversary of its release. Although the move was preceded by several in the MCU, with all the main characters (except for Maria Hill, I'm pretty sure) appearing previously (although Hulk/Bruce Banner was played by someone else), this was a singular accomplishment for the time; not the first super-team to make it to the big screen, even in the modern superhero movie era (both X-Men and Fantastic Four beat it), but the first to bring together distinctly solo characters, and thus, as the first billion-dollar-grossing superhero film, sparked off the juggernaut* that ate pop culture.

As such, the movie is more character-driven than action-driven; although it certainly has more than its share of action scenes, some of those are fights between team members, who are being stubborn or have deep-rooted differences or are being driven by the fancy mind-control spear or whatever. Not only does the movie show how they get past all that, but gives the rationale for the team existing in the first place (i.e. SHIELD can't simply handle the situation themselves), as well as setting up future conflicts.

91% on Rotten Tomatoes, both critics and audience. I like the excerpted line from Keith Garlington: "Everyone is invested in their character and not one single performer phones it in."

*Not that one--or two, depending if you consider the X3 one and the Deadpool one to be different characters.
posted by Halloween Jack (4 comments total) 3 users marked this as a favorite
Excellent deadpan summary above the cut. In that vein, it's been five years since he posted it to YouTube, but I still relentlessly giggle at 'glowy thing' and the various nicknames from MovieBob's Narrative Structure Analysis of Avengers (to compare against Batman v Superman) - runs from 4:21 to 5:51 - my link is roughly at the starting point of the Avengers bit.
And yeah. this is where I started caring about the MCU. I went in with minimal expectations, after enjoying the previous movies well enough. I left happy, and excited to see what the next movies could be. And when Agents of SHIELD and Agent Carter got announced, I was excited and hopeful about them.
And in the intervening, I haven't always been that happy with what Marvel built on it, or how fast they chose to build some of the pieces/plot the character moves. I certainly am less impressed with/ tolerant of Whedon than I was at the time.
But, as I feel about 1984 Ghostbusters, that euphoria was of its time, and I'm not trying to chase that same high with every new movie.
posted by Mutant Lobsters from Riverhead at 6:55 PM on November 6, 2022 [3 favorites]

It was an astounding movie at the time, mostly because of its ambition, so it had a big wow factor. But as they've built out the MCU it hasn't really stood the test of time. Not really it's fault. It just has so much to do it can really do any of it particularly well. I don't think I'd put it in my MCU top 10.
posted by dry white toast at 8:18 PM on November 7, 2022

Ah, for the days when you could say The Avengers and everyone in the United Kingdom knew who you meant.
posted by ewan at 2:33 AM on November 8, 2022 [1 favorite]

Ah, for the days when you could say The Avengers and everyone in the United Kingdom knew who you meant.
posted by Naberius at 7:15 AM on November 8, 2022 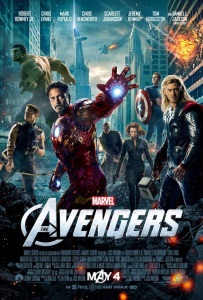