A documentary about the closure of General Motors' plant at Flint, Michigan, which resulted in the loss of 30,000 jobs. Details the attempts of filmmaker Michael Moore to get an interview with GM CEO Roger Smith.


A film by Michael Moore.

This is a movie that is undeniably well-made. However snide and self-important Moore got later, he was clearly on the side of the angels here. Fuck GM. Power to the people of Flint.

However, this film played fast and loose with timelines, used editing to make people look ridiculous, and generally reconfigured many of the facts to enhance their satirical input. A person could easily forgive this film for all of this, as again, it's entertaining and also, let it be said over and over,fuck GM. But it would be hard to look at the last decade or so of right wing "documentaries" and not see the recipe for their manipulative style in plain sight here. Similarly, when you consider the last thirty years of smarmy schmiberal "gotcha" comedy that makes lefties feel good but doesn't change much of anything, it all pretty much traces back to here.

This is probably why people are often less fond of this film in retrospect.
posted by DirtyOldTown (5 comments total)
It helps that GM of the time, and particularly Roger Smith were emblematic of everything wrong with US industry at the time. He was an accountant who didn't know anything about making cars. At one point, after negotiating a large pay cut with the union, he announced massive raises for the executive leadership. He had no idea why that pissed people off. Ross Perot was briefly on the board of GM, and was shocked that no one on the board drove GM cars. (If I remember correctly, none of them drove, period.) He was quickly bought out.
Besides the problems going on in Flint, Rodger Smith and GM at that time made a really huge target.
posted by Spike Glee at 11:42 AM on November 9, 2022 [1 favorite]

But it would be hard to look at the last decade or so of right wing "documentaries" and not see the recipe for their manipulative style in plain sight here.

Heck, David Zucker--of the Zucker-Abrams-Zucker (ZAZ) comedy team--did Moore the weird backhanded compliment of writing and directing An American Carol, this bizarre parody of A Christmas Carol in which a thinly-veiled version of Moore (played by the late Chris Farley's brother) gets converted to the conservative cause after finding out that terrorists nuke Flint.

I remember Roger and Me with good regard not so much because I think that GM should have kept making cars in Flint forever--at least the fossil fuel burners, for obvious reasons--or that Roger Smith is solely responsible for the Rust Belt rusting. It's the compassion that Moore shows for the people who were simply carelessly tossed aside with the most half-assed attempts at trying to pivot to something else; even if that theme park thing had been planned before the layoffs (IIRC that was one of the factual objections that critics of the movie had), did no one stop to think that maybe a Mr. Robot Who's Replacing You Is Your Friend exhibit was, you know, not great for the people whose lives, livelihoods, homes etc. were being ruined? Or the hometown boosters who protest a negative Money magazine article about the town by holding a rally where they play--literally, of just about all the songs that they could have possibly picked--Springsteen's "My Hometown"?

All that stuff, it's still happening. Big businesses will move to whichever city or state will give them a big tax break or otherwise guarantee profits, and if those tax breaks sunset, well, they'll move again. (The eighties were the decade when cyberpunk flourished, and cyberpunk, for all its trappings of rain-soaked neon cityscapes or console cowboys jacking into cyberspace, was also about corporations giving up on the earth completely and setting up shop in orbit, the ultimate tax haven.) Very tempted to give this one a rewatch.
posted by Halloween Jack at 2:34 PM on November 9, 2022

The biggest lie in this movie is that Michael Moore did get to speak with Roger Smith, but did not put that interview in the movie. Which would have gotten the movie pulled from distribution and made Moore as unemployable as Dan Rather if this was considered journalism instead entertainment.

I'll give Michael Moore credit though, he made the the documentary genre a lot more popular. I'm sure plenty of documentary filmmakers were able to get their projects made because this movie and Bowling for Columbine showed financiers and distributors how much money docs could make. I wish that success didn't come with the lesson that you don't need to let the facts get in the way of your message.

Also, I discovered Errol Morris when looking for alternatives to Moore, so that worked out for me.

Anyway, I'll end my off topic rant by recommending the memoir Rivethead: Tales from the Assembly Line by Ben Hamper, the forward is written by Michael Moore, who also appears in the book. Gives you an idea of what he was like pre-fame.
posted by riruro at 2:34 PM on November 9, 2022 [3 favorites]

Anyway, I'll end my off topic rant by recommending the memoir Rivethead: Tales from the Assembly Line by Ben Hamper, the forward is written by Michael Moore, who also appears in the book.

OMG! I love Rivethead! So darkly funny. More than once I had to leave a public place while reading it because I was laughing uncontrollably.
posted by chbrooks at 9:22 PM on November 9, 2022

Also came to this thread just to recommend Rivethead, and to thank my awesome high school English teacher Rob Peick who gave us the excerpt from Harper's.
posted by wenestvedt at 8:24 PM on November 11, 2022 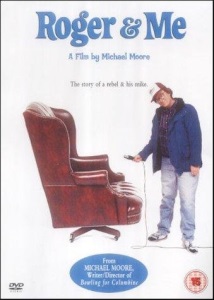