An ex-bomber pilot is suspected of murdering his unfaithful wife.


Discharged naval officer Johnny Morrison (Alan Ladd) returns to his wife, Helen (Doris Dowling), in Hollywood after fighting in the South Pacific, and with him are two military friends, George (Hugh Beaumont) and shell-shocked Buzz (William Bendix). Johnny is stunned to discover Helen's unfaithfulness with a local nightclub owner named Eddie (Howard Da Silva), who then breaks it off with her. When Helen is found murdered, everyone seems to have a motive.

Bosley Crowther: To the present expanding cycle of hard-boiled and cynical films, Paramount has contributed a honey of a rough-'em-up romance which goes by the name of "The Blue Dahlia" and which came to the Paramount yesterday. And in this floral fracas it has starred its leading tough guy, Alan Ladd, and its equally dangerous and dynamic lady V-bomb, Veronica Lake. What with that combination in this Raymond Chandler tale, it won't be simply blasting that you will hear in Times Square for weeks to come.For bones are being crushed with cold abandon, teeth are being callously kicked in and shocks are being blandly detonated at close and regular intervals on the Paramount screen. Also an air of deepening mystery overhangs this tempestuous tale which shall render it none the less intriguing to those lovers of the brutal and bizarre.

Steve Eifert: The result is an enjoyable Noir/Drama/Mystery, with a bourbon shot for a chaser and a bit of whodunit thrown in for measure. The only question is whether Bendix steals the show from Ladd, given his fine character portrayal of Buzz. If you can find it, The Blue Dahlia is definitely worth a visit.

Debbi Mack: Meanwhile, George and the aptly-name Buzz (played, respectively, by Hugh Beaumont and William Bendix) take an apartment together. Buzz almost immediately complains about the noisy neighbors. He gets headaches and is easily riled due to what was once called “shell shock” (read: PTSD) and a metal plate embedded in his skull. Yes, war is hell—even when it’s over.

Trailer
posted by Carillon (2 comments total)
This was pretty good. You definitely get the sense that the movie was really leading up to Buzz being the killer, and then the wind does come out of the sails a bit when it's revealed to be the house detective. I'm not shocked at all that the original ending was that, and the war board had it changed. I'm curious to know what the final resolution was, if Buzz was to be arrested or how that was handled. I guess we won't know. Doris Dowling also steals the show pretty well. I enjoyed her acidity here, and thought she shows the toll the whole ordeal has taken on her.
posted by Carillon at 12:00 AM on November 10, 2022

Great movie. Mean and agree that they pulled the punch they were setting up.

Odd that the lasting impact of it was the supposed inspiration for the naming of the Black Dahlia case. (or maybe just to me)
posted by drewbage1847 at 9:23 AM on November 10, 2022 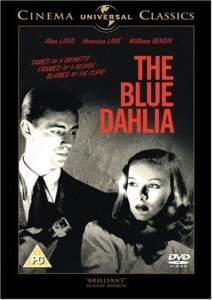