When terrorists seize control of an airliner, an intelligence analyst accompanies a commando unit for a midair boarding operation.


When terrorists hijack a plane traveling from Greece to Washington, D.C., U.S. Army specialist David Grant (Kurt Russell) and Lt. Colonel Austin Travis (Steven Seagal) join forces to bring the plane to safety. While terrorists on board the plane claim they hijacked the plane to force the U.S. government to release their leader, who was captured by military forces, David and Austin discover that the plane is carrying a bomb full of nerve gas to be released on Washington, D.C.

Janet Maslin: The contribution of "Executive Decision" to the world of "Speed" and "Die Hard" knockoffs is the thought of a runaway plane that must be surreptitiously boarded in midair. So Mr. Russell's think-tank analyst and Mr. Seagal's commando are soon aboard a U.F.O.-like aircraft with the hubcap look of "Plan 9 From Outer Space," even if it's in fact a modified F-117 Stealth fighter. Accompanied by a crew of actors with a careful ethnic mix (including John Leguizamo, B. D. Wong, Joe Morton and Oliver Platt, all offbeat choices that work), they mount a suction cup attack to the underside of the passenger plane and try to board it from underneath. What happens next is stark and genuinely shocking, at least within the context of how movies usually treat so-called movie stars.

Barbara Shulgasser: I actually like Russell and his easy charm and great teeth, but he hasn't ever achieved the level of stardom of Sylvester Stallone, Tom Cruise or Harrison Ford, so it seems unlikely that an audience will flock to see him as a guy who isn't good with a gun. He's like Ford's Jack Ryan, a policy wonk, who ends up having to do some dirty work. Ford somehow suspends disbelief when he leaps into action in those Tom Clancy movies. Russell never really gets your blood going.

The real gift here is the presence of David Suchet (of TV's "Poirot" ) as the monomaniacal Hassan. He is intelligent, dignified, super alert and nasty. And he has awfully nice deep brown eyes.

David Nusair: It's an inherently captivating premise that's primarily employed to enthralling effect by Stuart Baird, although it's just as clear that Baird does take his time in wholeheartedly drawing the viewer into the proceedings - as the movie boasts an entertaining yet far-from-engrossing opening half hour that's devoted primarily to exposition and character development. This deliberateness pays off exponentially once the action shifts to the aforementioned airplane, however, with the inclusion of several tense, thoroughly compelling sequences - eg Grant and the soldiers board the plane, a co-pilot discovers the would-be saviors' presence, etc, etc - triggering the film's transformation from a solid actioner into a seriously (and unexpectedly) enthralling piece of work.

Trailer
posted by Carillon (15 comments total) 1 user marked this as a favorite
The insertion scene of the team from a stealth bomber onto the jet has stuck with me since I've seen it. Obviously the fake out of the star is cool, but the scene itself is tense and well shot. Russell was solid, and just overall it stuck out to me as a solid action movie.
posted by Carillon at 9:52 AM on November 15, 2022

Steven Seagal in this was incredible!

His most enjoyable performance.

Anyways, I enjoyed this film at the time, and also when I've caught it when it shows up on TV or whatever. It's a solid action movie that gives us fish out of water characters in Platt and Russell, and does some interesting work with the idea of Die Hard on a Plane.
posted by nubs at 11:02 AM on November 15, 2022 [1 favorite]

This is the one where Seagal dies in like the first 10 minutes right? I remember laughing so hard at that unexpected plot twist.
posted by Saxon Kane at 11:45 AM on November 15, 2022

easily the best part of the movie was the sudden death. I suspect every Steven Seagal movie would be improved by unexpectedly killing him off.
posted by drewbage1847 at 1:23 PM on November 15, 2022

From the Roger Ebert review:

“Executive Decision” is a gloriously goofy mess of a movie about a hijacked airliner and a plot to poison, yes, “the entire Eastern seaboard of the United States.” (Why doesn't anybody ever poison the Western seaboard?)It's the kind of thriller where it's fun to chortle over the plot--a movie for people who are sophisticated enough to know how shameless the film is, but fun-loving enough to enjoy its excesses and manic zeal...

...And at this point the movie succeeded in really surprising me, because, while trying to board the plane, Seagal is sucked out of the tube and into the jet stream, no doubt to fall five miles while screaming the verys ame word that Butch and the Kid shouted when they jumped off that cliff. Any movie prepared to kill off Steven Seagal in the first 20 minutes is prepared for anything, and so I perked right up...

...The late Hollywood producer Ross Hunter, who died just as this movie was going into release, once explained to me the secret of the airliner-in-trouble genre. This was in 1970, when he produced “Airport.” “The thing is,” he said, “all these people get in the airplane and go up, and then something happens, and it doesn't look like they'll be able to get down again. Who can't identify with that?”
posted by nubs at 1:35 PM on November 15, 2022

I have never, before nor since, heard an entire movie audience gasp and then shriek in laughter as when Seagal is very thoroughly killed.
posted by Etrigan at 2:34 PM on November 15, 2022

If you enjoyed this movie you might also enjoy the most blantant rip-off I've ever seen, Executive Command, released only a year subsequent.
posted by coriolisdave at 5:06 PM on November 15, 2022

as when Seagal is very thoroughly killed.

Not so thoroughly that the kid behind me in the cinema could be convinced by his mates that he wouldn't be hanging off the tail of the plane.
posted by biffa at 6:09 PM on November 15, 2022

There was a minor trend for killing off name actors early in films. Mission Impossible was the same year and bumps off Emilio Estevez and Kristin Scott Thomas sharpish. I think there was another film that did something similar.
posted by biffa at 6:15 PM on November 15, 2022 [1 favorite]

Oh hey, it was Oceanic Airlines. Man, that company was jinxed.

Oceanic Airlines has a long history as a fake brand in TV and film, going back to 1965. Lost just made it really prominent. (For more on fake brands, check out this episode of Under the Influence, a podcast about advertising).
posted by nubs at 7:44 PM on November 15, 2022 [1 favorite]

This movie is usually mentioned in the context of evaluations of Islamophobic/anti-Middle Eastern xenophobic media (e.g. Reel Bad Arabs), and it probably was part of a media trend that used such Orientalist tropes. But in the film's actual 'text', the terrorists come off as pretty stock villains, and really the only truly fanatical character is the big bad, Nagi Hassan, who at the end goes beyond the wishes of his men.

On a different note, I always thought it was fun that Seagal's team- or should it be Leguizamo's team?- was cast as a diverse multiethnic group.
posted by Apocryphon at 1:59 PM on November 17, 2022

There was a minor trend for killing off name actors early in films. Mission Impossible was the same year and bumps off Emilio Estevez and Kristin Scott Thomas sharpish. I think there was another film that did something similar. 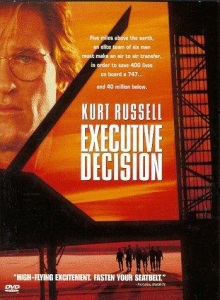