All The King's Men is the story of the rise of politician Willie Stark from a rural county seat to the governor's mansion.


Drama about the rise and fall of a corrupt southern governor who promises his way to power. Broderick Crawford portrays Willie Stark, who, once he is elected, finds that his vanity and power lust prove to be his downfall.

Produced and Directed by

Best Actress in a Supporting Role
Mercedes McCambridge
posted by Marky (1 comment total) 2 users marked this as a favorite
I have never actually seen this, but if I could give back the time I spent watching the Sean Penn version and watch this instead, that is a thing I would do.
posted by DirtyOldTown at 8:35 AM on November 16, 2022 [1 favorite] 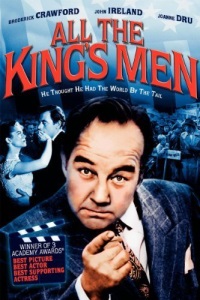