A relatively boring Los Angeles couple discovers a bizarre, if not murderous, way to get funding for opening a restaurant.


1982. The absurd Blands lure swingers home to be conked by a skillet, robbed and removed by Raoul.

JustWatch listing.
posted by Marky (7 comments total) 3 users marked this as a favorite
Paul Bartel and Mary Woronov's characters make a brief appearance in Chopping Mall.
posted by miss-lapin at 6:38 PM on November 18

"You mean inexpensive, don't you? Isn't that what you meant?"

This has Robert Beltran, over a decade away from being on Star Trek: Voyager; the next movie, Krull, stars Ken Marshall, likewise over a decade out from Star Trek: Deep Space Nine. Interesting coincidence.
posted by Halloween Jack at 11:07 PM on November 18 [1 favorite]

Really? Why haven't there been more films in the extended Chopping Mall multiverse?!
posted by Saxon Kane at 9:06 AM on November 19 [2 favorites]

They appear during the announcement in the mall about the security system (soon to be killbots) in the opening of the movie. They apparently ad libbed most of their lines.
posted by miss-lapin at 7:51 PM on November 19

The subversive streak of preying on LA's worst people was really not what I expected. Fun movie.
posted by ipe at 10:10 PM on November 19 [1 favorite]

When I was small, probably 6 or 7, I used to go to the corner store with my grandmother to buy cigarettes. This was the mid-80s, when video stores were exploding everywhere, and this corner store had added a pretty sizeable video section.

At that age, I was obsessed with horror movies (I don't know how I found them, but by 1987 I was already in love with Freddy Krueger), and for whatever reason, Eating Raoul was displayed in the horror section. Every time I saw it, next to Transylvania 6-5000, the cover intrigued me, with its blood-red lips and giant teeth, and I always wanted to rent it to see what I was sure was a gory horror-comedy.

In any case, when I saw that it was on HBO I told this story to my wife and she was like, oh! me too! We'd both had the same reaction to the poster for this film (and yet are somehow not vore fetishists, nttawwt), and so we watched it.

What a fuckin trip! I could have done without the visceral depiction of sexual violence played as comedy (seriously, this is the hardest part about sex comedies from the before times, just ugh), but the rest of it? A real delight. Everybody is just so, so funny and perfectly-played.

7-year-old me obviously wouldn't have enjoyed this movie (outside of the frying pan head-conks), but as an adult I thought it was a real treat.
posted by uncleozzy at 6:25 AM on November 21 [1 favorite] 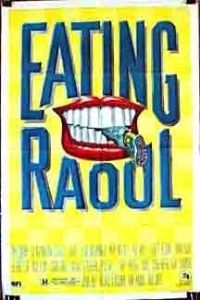