[TRAILER] Young history buff Kevin (Craig Warnock) can scarcely believe it when six dwarfs emerge from his closet one night. Former employees of the Supreme Being (Ralph Richardson), they've purloined a map charting all of the holes in the fabric of time and are using it to steal treasures from different historical eras. Taking Kevin with them, they variously drop in on Napoleon (Ian Holm), Robin Hood (John Cleese) and King Agamemnon (Sean Connery) before the Supreme Being catches up with them.

Directed by Terry Gilliam. Co-written by Gilliam and Michael Palin.

Currently streaming in the US on HBO Max and Criterion. Also available for digital rental. JustWatch listing.

Today, I'm posting a half dozen 80's fantasy films that were on repeat on cable back in the day.
posted by DirtyOldTown (29 comments total) 6 users marked this as a favorite
This was the film we rented when my family bought our first VCR. My brother and I must have watched it about a dozen times before we returned it - it was so amazing to us to be able to rewatch a film!

Between this, TRON, and Time After Time, David Warner had an excellent villain run there on the cusp of the decade.
posted by Halloween Jack at 11:03 AM on November 22, 2022 [7 favorites]

I honestly think this is the perfect film for tweens. It's just irreverent and saucy enough to not feel too "babyish", but it's still fantastical and innocent enough for kids who are still not quite teens yet.
posted by EmpressCallipygos at 11:28 AM on November 22, 2022 [8 favorites]

Absolutely scared out of my mind by the face of God at the beginning of this movie, and the way that the room expanded -- the wallpaper too! But it wasn't long before I got a few years older and realized it was one of the most amazing scenes on film at the time.

As someone who studied ancient Greece in college, including the language, I still think that the scenes in Mycenae are some of the most effectively Bronze Age scenes put on film. Anachronisms? Sure, but it all adds up to an atmosphere of a very lived-in Mediterranean town, as indeed it was, in Morocco. And look, we know so little about ancient music, but you can't tell me this doesn't sound fantastically Mycenaean.

God I love this movie. I don't know how we ended up renting it the first time, but it was one of my favorites and in heavy rotation from Video Visions, our local rental place.

But the end always made me sad. I remember seeing Gilliam talking about how young boys love the end of the movie but young girls (like myself) found the ending sad.
posted by miss-lapin at 1:40 PM on November 22, 2022 [4 favorites]

One of the movies I raised my kids on.

I always had a soft spot for the Shelly Duvall/Michael Palin forever getting cock blocked routines.
posted by 2N2222 at 9:28 PM on November 22, 2022 [4 favorites]

But the end always made me sad. I remember seeing Gilliam talking about how young boys love the end of the movie but young girls (like myself) found the ending sad.


I'm a boy, and that last scene followed by the zoom out messed me uuuuup.

Great and quotable movie tho.

This was the first movie I ever bought. It was a VHS tape.

As a boy of no older than 10 at the time, the ending was a gut punch. I was overseas at the time and the family knit was pretty tight, the thought of just losing the parents like that. In hindsight a pretty radical way to end a film, kind of the sharp pointy end of Gilliam's intellect here? I can't say I've loved a Terry Gilliam film in its entirety and I find his excesses tend to get off-putting, but this movie came at the right time and place (for me) and it's a tremendous creation. By no means perfect, but tremendous. Emphatic yes to showing this to tweens, but it might drive them (a bit) crazy.
posted by elkevelvet at 3:25 PM on November 23, 2022 [2 favorites]

But the end always made me sad.

I thought this too, but then I realised that he has a clear photograph of the map which I am sure coulod be blown up and used.
posted by Fuchsoid at 7:04 PM on November 23, 2022 [3 favorites]

Loved how allovertheplace this movie was!

The Incomparable Podcast did an episode on it recently, and were pleased to discover that The Suck Fairy had left it largely untouched.
posted by wenestvedt at 8:26 PM on November 23, 2022 [1 favorite]

This is that rare type of film that leads to so many little film festivals, for me:
Ian Holm with an accent, or not
Katherine Helmond anything
sea creatures? giants? the middle ages? sure
Sean Connery being a good guy and looking pretty good in that wig this time
the ending, yes, a story about a child but ambiguous?
David Rappaport, Randall, let's follow him anywhere
Great Villains and their Great Lines
posted by winesong at 9:33 AM on November 25, 2022 [3 favorites]

This post prompted me to look up what happened to David Rappaport.I had no idea.So sad.
posted by miss-lapin at 2:36 PM on November 25, 2022 [2 favorites]

This is the movie that made me realise how differently I experience things as an adult, than I did as a child.

When I first saw this, I was about 11, I think? And the ending absolutely horrified me. It felt huge and dark and terrifying.

This gives me the chance to plug one of my favourite, but sadly defunct podcasts: David Quantick on Rule of Three talking about why Time Bandits works so well and its relationship to Monty Python.

Rules of Three is a very Bake-Off sort of podcast – it is people talking about things they love – and David Quantick is insightful and funny on why it is such a fantastic, odd film.

Check out Rule of Three. Several of them have made me laugh embarrassingly loud on the tube
posted by finisterre at 2:27 PM on November 26, 2022 [2 favorites]

that's an interesting comment, miss lapin... as a young boy the ending did indeed delight me, since my take was "he has no family and no home... he can do ANYTHING now!" but I had plenty of friends who said it was terrifying for the same reasons!
posted by lefty lucky cat at 8:50 PM on November 26, 2022 [1 favorite]

I remember being confused in a way that wasn't unpleasant, exactly. I was very attached to my own parents, so I was horrified at first, but Kevin's parents were very stupid, and the fact that the king was also the fireman told me that something magical was out there that he could still be part of. And that's filmmaking! Kids aren't too young for ambiguous endings, assuming they're done skillfully.
posted by Countess Elena at 7:26 AM on November 27, 2022

So i am trying to find the interview I remember and found this where Gilliam talks about how kids loved the ending.
posted by miss-lapin at 3:28 PM on November 27, 2022 [1 favorite]

This is a great movie to watch if you want to repeatedly interrupt someone else's viewing by saying, "Oh there's so and so! Remember from X?!" It's also a fun movie, too. though, as a kid who loved Robin Hood, I was always a bit irritated at how he's played off as a jerk by John Cleese. It's all just a perfect distillation of Terry Gilliam and should totally be packed as a set with The Adventures of Baron Munchausen, as the two have the same chaotic energy of traveling from one odd situation to another on a merry silly ship of fantastic characters.

Add me as one more person horrified by the ending, and at the same time, always curious over Sean Connery's reappearance as a fireman there at the end. And I have to split this, as the death of his parents is so dark...but then just how everyone just packs up and leaves him standing there in his pajamas staring at the burnt ruins of his home...that's pretty hilarious.
posted by Atreides at 11:39 AM on November 28, 2022

It's all just a perfect distillation of Terry Gilliam and should totally be packed as a set with The Adventures of Baron Munchausen, as the two have the same chaotic energy of traveling from one odd situation to another on a merry silly ship of fantastic characters. 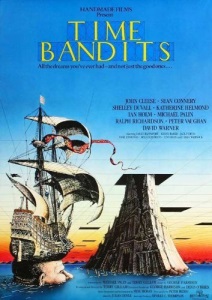