In the ruthless underground world of the yakuza, no one is more legendary than boss Kamiura. Rumoured to be invincible, the truth is he is a vampire, a bloodsucking Yakuza vampire boss.


Kamiura infects Akira with vampirism when he is finally defeated. It's a difficult movie to synopsize so I'll say it includes someone whose brain melts out their ears, a room of men knitting, a romantic scene at a dump, a vampire army, and lots of fights.

Directed by Takashi Miike and featuring the martial artist Yayan Ruhian. Available to stream or rent on multiple services.
posted by miss-lapin (4 comments total) 1 user marked this as a favorite
A friend of mine and I decided to watch it last night. Do not watch it on Amazon Prime. The subs are allllll wonky. It's a hard enough movie to follow even with subs so definitely do not watch it on Prime. We ended up watching it on tubi and the subs were good.

We LOVED it. Now I admit alcohol was involved, but we laughed and agreed this one of the best films we've watched together. It kind of reminded me of 70s Italian horror in you can't look for any logic. You just have to go with it. We did and we had lots of fun.
posted by miss-lapin at 7:23 AM on November 27, 2022 [1 favorite]

Not the most Takashi Miike movie ever, but certainly ranks up there.

Somewhere there is an amusing interview where he is asked about the inspiration for the frog. Miike gave this flippant answer about how there was a pharmacy chain with a frog mascot and he wondered what the frog thought of the world. Sadly, I couldn't find the interview again to share here.
posted by forbiddencabinet at 11:40 AM on November 27, 2022 [3 favorites]

The frog fights were the best part. I think I've posted some frog fight video several times over the years. An interesting movie......
posted by zengargoyle at 8:37 PM on November 27, 2022 [1 favorite] 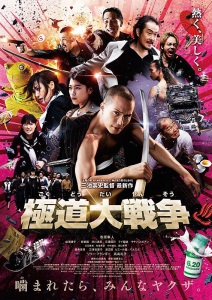