[TRAILER] Holly Golightly (Audrey Hepburn) is an eccentric New York City playgirl determined to marry a Brazilian millionaire. But when young writer Paul Varjak (George Peppard) moves into her apartment building, her past threatens to get in their way.

Directed by Blake Edwards. Screenplay by George Axelrod, based on the novel by Truman Capote. Music by Henry Mancini, including the enduring classic song Moon River. (BTW, the recent cover of this by Frank Ocean is tremendous and you should listen to that.)

Currently streaming in the US on Amazon Prime, Paramount Plus, and Epix. Also available for digital rental on multiple outlets. JustWatch listing.

The film is a beloved romantic comedy with an epic star turn from Hepburn. But it was for sure also screened at the Pearly Gates in 2014 by way of explaining to Mickey Rooney why he was definitely going to Hell.

That wouldn't make any sense at all. A joke about an IBM supercomputer doing ... something ... might be more in line. Hammer the under on that one, I guess.
posted by LionIndex at 2:18 PM on November 28, 2022

DirtyOldTown, I too believe to this day that Better Than Ezra performed Breakfast at Tiffany's but it is Deep Blue Something. I'm so glad someone else shares this delusion.
posted by kittensofthenight at 4:28 PM on November 28, 2022 [5 favorites]

The scene that fascinates me at the beginning is when Paul knocks on Holly’s door and wakes her up. Then there’s a short conversation while she gets dressed: from pajama top and sleep mask to Audrey! Hepburn! in five minutes.

I’ve never heard of anyone proposing to remake it in a version closer to the original story with a Marilyn Monroe-ish Holly and a gay Paul. I read it long ago and don’t remember much about it.
posted by TWinbrook8 at 11:40 PM on November 28, 2022 [2 favorites]

Regarding Holly's wardrobe and the quick changes, what always amazed me was that she owns very little clothing. She repeats outfits throughout the movie.

There's just a dress, a few tops and pants, maybe a coat or two, and then she switches all the accessories around and looks totally different.

I read the actual novella this past year, and I was amazed what a difference it makes. For one thing, Mr. Yunioshi only turns up briefly and is no caricature at all. (There's weird racial stuff in the story, but not that.) And Holly Golightly is what we would now call a traumatized survival-sex worker. It's not a love story. I'm not sure I should even watch the rest of the movie, outside of the famous bits I have seen.
posted by Countess Elena at 8:39 AM on November 29, 2022 [2 favorites]

Just watch the episode of Seinfeld where George tries to watch the movie version instead of reading the book for his book club.
posted by Saxon Kane at 9:36 AM on November 29, 2022 [2 favorites]

This is one where, if you like the novella, don't watch the film with close expectations; if you like the film, the novella is very different. I think Audrey Hepburn did her best, and the film is lovely to look at and went where it had to go (romance between main characters) due to the times. The Mickey Rooney sequences are awful. Patricia Neal is great as the older, slightly venomous, woman of the world with her latest boy toy. You can tell she's financed more than one up&coming "artist" before.
posted by winesong at 4:36 PM on November 29, 2022 [1 favorite]

The movie that launched a million Ikea canvas prints.
posted by The corpse in the library at 12:05 PM on January 1 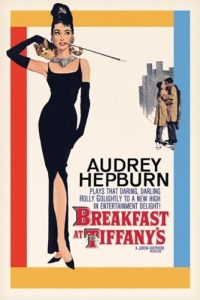