[TRAILER] At a luxurious Berlin hotel between the wars, the once-wealthy Baron Felix von Gaigern (John Barrymore) supports himself as a thief and gambler. In this lavish adaptation of the successful Broadway play, the baron romances one of his marks, the aging ballerina Grusinskaya (Greta Garbo), and teams with dying accountant Otto Kringelein (Lionel Barrymore) against his former boss, crooked industrialist Preysing (Wallace Beery), and his ambitious stenographer, Flaemmchen (Joan Crawford).


Directed by Edmund Goulding. Screenplay by William A. Drake, based on his 1930 play, and Grand Hotel, a 1929 novel by Vicki Baum.

Today, I'm posting six movies that won the Oscar for Best Picture that have not yet been added to FF.
posted by DirtyOldTown (4 comments total)
This was the inspiration for the late 1980s Broadway musical excerpt)
posted by pxe2000 at 10:43 AM on November 29, 2022

This is...something. Theatrical as heck, since they hadn't invented acting for the screen quite yet, but for that reason, deeply charming.

(The novel is more ambitious, and grimmer, but quite readable, especially if you're doing a interwar German literature binge.)
posted by praemunire at 1:17 PM on November 29, 2022

I love Lionel Barrymore, especially when contrasted with the role his brother John plays, Lionel is just so much more real. And it's delightful to see young Joan Crawford "shopgirl" role that she was often cast in before snagging serious roles; she has a great playfulness and light comedic touch that got lost in the serious roles.
posted by winesong at 10:09 AM on November 30, 2022 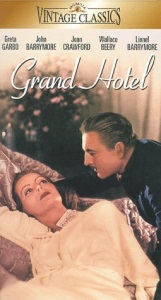