In Shanghai, China in the 1940s, a wannabe gangster aspires to join the notorious "Axe Gang" while residents of a housing complex exhibit extraordinary powers in defending their turf.


"There are good action movies, there are great action movies, and then there are movies like Kung Fu Hustle that pack a head-spinning amount of style, character, conflict, and seemingly disparate genres into less than 100 minutes and make you wonder what even the *good* ones are doing wrong."
Two Cents Film Club Obliterated by Kung Fu Hustle

"Even the most initiated fans probably can't parse all the movie references, old-school kung-fu faces, and interconnected film production ties - and we're not claiming that we can either. But we'll try."
The Six Degrees of Stephen Chow and Kung Fu Hustle - Ross Chen

"Undaunted by the constant humiliations heaped upon him by people of higher social standing, Chow’s character never fails to have the last laugh, more often than not by a few clever twists of his nimble tongue. Such verbal humor involves the exercise of an attitude known as mo lay tau, an irreverence expressed in mischievous, nonsensical comic remarks, often adopted by the defeated as a face-saving stance to claim moral victory."
Sam Ho

"Chow's popularity remains because the primary audiences who are of ticket-buying age -- the 15-25 year olds -- are exactly the audiences which grew up on Chow in the early '90s, and continue to see his films on cable television. It's hard to over-emphasize Chow's enormous effect -- for better or worse -- on the psyche of any Chinese person in this age group."
He Said, Chi Said: Kung Fu Hustle - Chi Tung and Brian Hu

"Kung Fu Hustle, which is the supreme achievement of the modern age in terms of comedy. [...] I was like, "Oh man, I just saw this thing," and "God, that's just staggering, just staggering. That movie is just AHHHHHH!" And when I saw that, I was like: That. Just. Happened. There should have been a day of mourning for American comedy the day that movie came out."
Bill Murray

"Kung Fu Hustle is essentially one long computer-enhanced Looney Tunes punch-up - and probably the most fun you'll have at the movies all year."
Paul Arendt

posted by Paragon (6 comments total) 8 users marked this as a favorite
Watch this movie. It really is that funny and action-packed. It even holds up on multiple viewings.
posted by mrphancy at 6:15 PM on November 29, 2022 [2 favorites]

There are a few mean-spirited moments in the film that didn't quite land with me, but otherwise it's a wild ride.
posted by praemunire at 8:33 PM on November 29, 2022 [3 favorites]

Yeah I tried to find a decent analysis of the casual homophobia and accompanying slurs but didn’t turn up much. It’s definitely a smear on an otherwise fascinating film.
posted by Paragon at 8:42 PM on November 29, 2022

This movie. Yeah, it's one of the most amazing things I've ever seen. Just so much fun, so silly, yet it manages to keep things fresh for the whole movie.
posted by Saxon Kane at 9:33 PM on November 29, 2022 [1 favorite]

Yah, it's a fun movie, but some of the aforementioned elements kind of threw me when I watched it.

Not that I'm some kind of aficionado, but my go to Stephen Chow movie is Shaolin Soccer, which I find consistently hilarious and have seen a few times. Haven't seen it in a while though, so can't recall if there's any significant content that's aged poorly.
posted by Alex404 at 12:14 AM on November 30, 2022 [2 favorites] 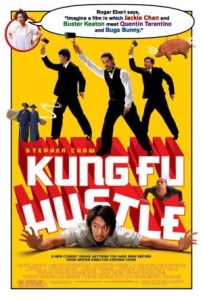