[TRAILER] Thornton Melon (Rodney Dangerfield) is concerned that his son Jason (Keith Gordon) is unsure whether to go to college, so the uneducated self-made millionaire encourages him by signing up as a student as well. As Jason tries to establish himself among his peers and make the diving team, Thornton falls for a pretty professor (Sally Kellerman) and gets others do his schoolwork for him. When the suspicious dean (Paxton Whitehead) finds out, Thornton needs to show he can get by on his own.

Currently streaming in the US on HBO Max. Also available for digital rental in the US on multiple outlets. JustWatch listing.

Today, I'm going to be posting six 80's teen comedies that seemed to constantly be playing on cable back in the day.
posted by DirtyOldTown (11 comments total) 1 user marked this as a favorite
This is probably the best one of these movies, and if that surprises you to hear, it's been too long since you've seen it.

Here's the scene where the person Thornton hired to do his paper on Kurt Vonnegut shows up... and it's Kurt Vonnegut.
posted by DirtyOldTown at 10:33 AM on November 30, 2022 [7 favorites]

Which leads to the great joke when his teacher/love-interest says something to the effect of "whoever wrote this paper on Kurt Vonnegut doesn't understand the first thing about his work!"

Also for literature nerds, Thornton falls for the professor when he hears her reading the end of James Joyce's Ulysses, responding to "yes i said yes i will yes" by jumping out of his seat and shouting, "Yes! Yes!" He later says, "Oh I love Joyce, she's my favorite author."

This movie is pretty hilarious and holds up pretty well. So many good bits: "I have one question... in 27 parts." Also, don't forget Robert Picardo (aka The Doctor from Star Trek Voyager) as Adrienne Barbeau's piece on the side.
posted by Saxon Kane at 11:16 AM on November 30, 2022 [3 favorites]

And also Robert Downey Jr. has a line about "everyone knows football is a metaphor for thermo nuclear war" or something along those lines. Sam Kinison in there as well.
posted by conifer at 11:36 AM on November 30, 2022 [2 favorites]

This is probably the best one of these movies, and if that surprises you to hear, it's been too long since you've seen it.

I haven't seen this since probably 1990 when I was 19. I remember liking it. It certainly was fairly good-natured and overall fun. I don't remember any scenes of sexual assault, so that puts it above some other '80s comedies. But I could be wrong.
posted by SoberHighland at 12:18 PM on November 30, 2022

Sally Kellerman quietly gives one of the best performances of the 1980s in this movie. It is the absolute pinnacle of the "put-together woman falls for the slob despite herself" trope.
posted by Etrigan at 12:57 PM on November 30, 2022 [5 favorites]

And Rodney Dangerfield line about his ex-wife: "I'm an earth sign. She's a water sign. Together we made mud."

I saw it in 1986, and I was surprised then that it took eight people to write this.

According to this article, that is a product of Dangerfield having written the original script with some friends, a rewrite being done by a writing team to get it in shape to be greenlit and then one more rewrite being done by Ramis and Torokvei (who also worked on Real Genius) to alter the premise to be about a rich guy instead of a working class guy.
posted by DirtyOldTown at 6:00 AM on December 1, 2022 [1 favorite]

Fun fact: the producer of this film was Chuck Russell (The Mask, The Blob, Nightmare on Elm Street 3: Dream Warriors).
posted by DirtyOldTown at 6:01 AM on December 1, 2022

I guess this is as good a place as any to talk about an odd memory I have from seeing this movie in the theater as a 12 year-old (my dad was a big fan of borscht belt comedians.)

There's a scene early in the movie where Rodney and his chauffeur (the inimitable Burt Young) clear out the school's registration hall by tricking a crowd of students into thinking Bruce Springsteen's limo is parked outside. I have a very specific memory of the driver holding up a sign on which he'd written simply "The Boss" and being very confused as to why the college kids were all getting so excited. (I didn't know at the time that 'The Boss' was Springsteen's nickname.)

Cut to a few years later, while watching the movie on HBO: that scene plays out the exact same, only now when the driver holds up the sign, it clearly reads "Bruce Springsteen."

My theory at the time (and still to this day) is that at some point after the initial theatrical run they must have edited the film, adding a new insert shot in order to clarify the point of that gag. (I assume I wasn't the only one confounded by not knowing a rock star's sobriquet.)

Anyone else catch this movie in the theater who might be able to either verify or debunk this memory?
posted by Atom Eyes at 1:21 PM on December 1, 2022 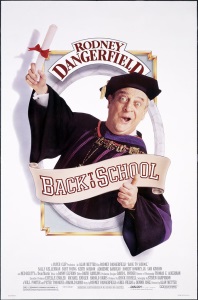