A New York City architect becomes a one-man vigilante squad after his wife is murdered by street punks. In self-defense, the vengeful man kills muggers on the mean streets after dark.


The first in the Death Wish franchise, and arguably a bit nuanced in its portrayal of trauma and PTSD as contributing factors to the main character's (Paul Kersey) vigilante turn; things go rapidly downhill in the sequels, becoming almost self-parodies of lunatic over-the-top White Man Solves Everything With Guns stories.

The first Death Wish still has a veneer of respectability; Charles Bronson was at the time still a reasonably respectable actor, coming off everything from the Magnificent Seven to Mr. Majestyk. An absolutely dynamite score by Herbie Hancock, of all people. The first screen appearance of Jeff Goldblum, a blink-and-you-miss-him "freak" with undeniable screen presence.

Worth watching? It's an artifact of its time, for sure, and a damn sight better than any of the sequels, including the 2018 Bruce Willis remake, which is a bit harder to mock now due to retroactive knowledge of his aphasia and not knowing when exactly it started.
posted by Shepherd (5 comments total)
Starring Jeff Goldblum and Maria from Sesame Street.
posted by The Hamms Bear at 7:03 PM on November 30, 2022 [2 favorites]

The blog post about the history of the Jughead Hat linked to in a “previously on MF” thread seems to have gone private, but some info can be found at this Laughing Squid post.
posted by Ranucci at 10:36 AM on December 1, 2022 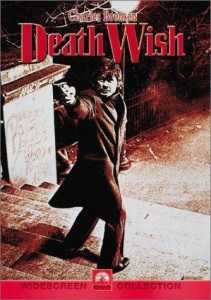