[TRAILER] Daisy Werthan (Jessica Tandy), an elderly Jewish widow living in Atlanta, is determined to maintain her independence. However, when she crashes her car, her son, Boolie (Dan Aykroyd), arranges for her to have a chauffeur, an African-American driver named Hoke Colburn (Morgan Freeman). Daisy and Hoke's relationship gets off to a rocky start, but they gradually form a close friendship over the years, one that transcends racial prejudices and social conventions.

Directed by Bruce Beresford and written by Alfred Uhry, based on his 1987 play of the same name. Music by Hans Zimmer.

Currently streaming in the US on HBO Max. Also available for digital rental. JustWatch listing.

Trivia: there was also a failed TV pilot for this, three years later. This YT video has some clips. It starred Robert Guillaume, Joan Plowright, and Saul Rubinek.
posted by DirtyOldTown
« Older Book: The Measure...   |  Movie: The Greatest Show on Ea... Newer » 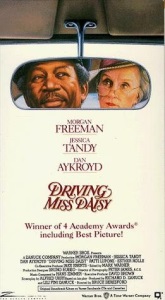