[TRAILER] To ensure a full profitable season, circus manager Brad Braden engages The Great Sebastian, though this moves his girlfriend Holly from her hard-won center trapeze spot. Holly and Sebastian begin a dangerous one-upmanship duel in the ring, while he pursues her on the ground.

In addition to the actors, the real Ringling Bros. and Barnum & Bailey's Circus' 1951 troupe appears in the film with its complement of 1,400 people, hundreds of animals and 60 railroad cars of equipment and tents. The actors learned their circus roles and participated in the acts. The film's storyline is supported by lavish production values, actual circus acts, and documentary-style views into the complex logistics behind big-top circuses.

This features prominently in The Fabelmans as the movie that inspired that film's Steven Spielberg-inspired character to begin filmmaking.

Currently streaming in the US on Kanopy. JustWatch listing.
posted by DirtyOldTown (1 comment total)
Watch it for the spectacular SFX of the train wreck. It’s actually kinda jaw-dropping.
posted by Thorzdad at 1:55 PM on January 18 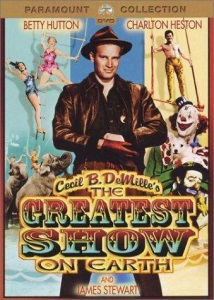