Join me in First-Watching the allegedly addictive series! In this thread, discussion of the first episode, "Miniseries Part 1".
posted by threeants (14 comments total) 5 users marked this as a favorite
You are going to have so much fun! I'll be watching these threads to relive the magic some.
posted by sparklemotion at 7:02 AM on June 20, 2014 [4 favorites]

Oh, so good! This is a premier I wish I could go back and see for the first time again, but it holds up every time I rewatch it. Me too what sparklemotion said.
posted by rtha at 9:03 AM on June 20, 2014 [1 favorite]

Oh, was so happy until I noticed it's a First Watch! I will keep clear away so as not to spoil.

I got through Season 3 and have dropped it for a long while.

I enjoyed the miniseries well enough, but the first episode of the series proper is where it hits gear.
posted by DirtyOldTown at 6:38 PM on June 20, 2014 [4 favorites]

I don't know if I'll watch the entire series, but I've never seen the miniseries so I thought I'd watch it with you. I probably won't have time to participate in much deep commentary but I thought I could take some notes while I watch this for the first time.

-I legitimately love that one of the first humans you see in the series is a paunchy middle-aged guy in a polo shirt.

-A million dorky boyfriends just leaned over to their girlfriends and whispered "This is all one shot..."

-That'll do, Battlestar Galactica, you have sufficiently established the fact that Tingh is a drunk.

-Oh good, a chance to finally see why people have a soft spot for Tahmoh Penikett.

-It's weird to actually like a character that the show is trying so hard to make you like. (Re: Starbuck)

-Um! If it just threw me for a total loop that Adama said "Jesus", is this not the show for me?

-"Did you see Serenity?" the dorky boyfriend asks. "It was up in the- Do you want me to rewind it? Okay, I'll shut up."

-I feel like the "Tricia Helfer snaps a baby's neck" scene probably wouldn't have survived another round of revisions. Maybe it has a bigger significance later, but it feels to me like with one more pass a writer would have realized "maybe this scene doesn't communicate as much as I hoped."

-HAHAHAHA I AM UTTERLY DELIGHTED BY GAIUS BALTAR

-Seriously, what show did he come from? It's like if Alexander Siddig lost a bet and had to film somebody's fanfiction. (Do not under any circumstances read that as a complaint.)

-Are there any sex scenes on this show that don't involve one person slamming another against the wall?

-HA OMG the littlest Baltar and statuesque Tricia Helfer swanning around like a community theater production of Only Lovers Left Alive.

-Two Lee Adama scenes in and I can already feel the future hours of my life slipping away. He has the stink of "character whose arc the writers are way more interested in than the viewers are" all over him.

-ugh this Adama family reunion scene draaaaags. At this point I'd take a montage of Tricia Helfer killing infants.

-I really love the low key way knowledge of the attack on the homeworlds spreads through the ship. The show does a great job of showing total professionals acting on instinct while being completely blindsided. For example, it's great that they left in Olmos' line flub when he first addresses the crew.

-Damn, those Cylon ships look corny as hell. Also, I thought this was a no-sound-in-space show?

-That image of the refugees fleeing over the hill is really haunting.

-The ludicruousness of this lottery scene (with nushroom clouds on the horizon!) boggles the mind.

-"Scratch that, this is Colonial One" is a nice touch. Air Force One isn't just a specific plane, it's also the call-sign for any plane the president is on. So when LBJ was sworn in, that plane became Air Force One.

-"Frak" has always bugged me, but for reasons too complicated to get into here. Maybe in another episode's thread.

-Adama reacts to his son's apparent death with such a derp face! On a more serious note, it's a (little) ridiculous that everyone on the bridge reacts so strongly or even comforts him, considering that they have to assume that they've lost everyone in their lives as well.

Sorry my comments weren't that deep. I'm definitely down for part two of the miniseries, and I'll decide if I'm going to continue from there.
posted by Ian A.T. at 9:37 PM on June 20, 2014 [8 favorites]

HA OMG the littlest Baltar and statuesque Tricia Helfer swanning around like a community theater production of Only Lovers Left Alive.

Mod note: A couple of comments deleted. Probably better to not drop hints about how character development will go, etc. Thanks.
posted by taz (staff) at 7:01 AM on June 22, 2014 [3 favorites]

I'm not sure if this is the right place to ask, but on what sort of schedule are we thinking this First Watch will be? One or two episodes per week?

I don't think I've gotten through Season 2 yet—maybe not even all of Season 1—so I'm looking forward to maybe finally moving along in the series.
posted by obloquy at 2:48 PM on June 22, 2014

Sorry it took me a little while to watch this myself.

Thanks taz. Appreciate passersthrough doing their best not to drop any spoilers or spoileroid comments!

obloquy-- to be honest I hadn't really thought of a hard schedule. Two-ish per week maybe, unless folks comment that it's too fast/slow?

ok, I'm sure I'll have Lots of Thoughts once we get more invested in the series, but so far...

I feel like it's supposed to be a plot point that John McCain is a drunk, but he seems to do fine so far at actually commanding? Even though, damn, that dude just needed forty seconds. Cold.

...ha, looking back at Ian's comment, I see he concurs: That'll do, Battlestar Galactica, you have sufficiently established the fact that Tingh is a drunk.

For some reason the "we only have room for X number of people on the Vessel to Safety!!!" plot point always beggars my belief a bit. Like, seriously, it's the end of the fucking world and you can't have people sitting on laps?!

...and, uh, good luck on survival to the soldier who threatened to shoot everyone and then abandons himself to Apocalypse World. Talk about how to win friends and influence people. And good judgement call on Gaius Baltasar, brah.

Yo, I could have called that Evil Scarlet Johansson was a robot just from talking to her for a few seconds. That lady just ain't right. And protip: if someone strokes your baby while muttering "so very fragile", consider keeping an eye on the situation.

I'll be posting a new thread within a day or two; thanks for joining me, Ian, and I others will join in and also look forward to picking up the folks who said they'll be able to join at a specific forthcoming episode!
posted by threeants at 7:14 PM on June 22, 2014 [3 favorites]

For some reason the "we only have room for X number of people on the Vessel to Safety!!!" plot point always beggars my belief a bit. Like, seriously, it's the end of the fucking world and you can't have people sitting on laps?!

In that scene, I think it was more about how many people/how much weight the Raptor could lift.
posted by His thoughts were red thoughts at 10:28 PM on June 22, 2014 [1 favorite]

Yeah, the Raptor is a tiny little ship. It can only carry so many people into orbit and provide life support for them in space.

Nice sense of how wretchedly desperate everyone is that that one guy actually seems to think he's going to hang onto the outside of a spaceship. (Following the really nice choices of what people have chosen to save as they flee the end of the world through an open field. Someone's actually got a painting.)
posted by Naberius at 7:21 AM on June 23, 2014

-Seriously, what show did he come from? It's like if Alexander Siddig lost a bet and had to film somebody's fanfiction. (Do not under any circumstances read that as a complaint.)

Oh my god, there is totally an "Alexander Siddig lost a bet" quality to Baltar, though I never in a million years would have thought to codify it that way. Well played.
posted by thesmallmachine at 4:45 PM on June 24, 2014

Ron Moore used to blog about the show at scifi.com, but those posts are gone. He'd answer viewer questions.

Q: "Does James Callis' uncanny resemblance to Alexander Siddig in almost every way ever freak you out?"
Ron Moore: "Not until someone on these boards mentioned it, now I'm totally freaked."
posted by qi at 3:53 PM on June 26, 2014 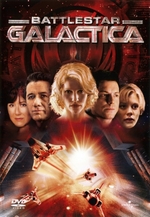