A soldier learns he is the "chosen one" who is destined to lead humanity and end the devastating war with the angels once and for all.
posted by Catblack (6 comments total) 1 user marked this as a favorite
It was not as terrible as the reviews said! In no order of importance:

1. WTF, Anthony Stewart Head gets drunk and turns whatever that American accent was? I almost miss Merlin.

2. The lesbian kingdom was slipped in nicely - the visiting diplomat who sleeps with ASH is the wife of Queen Eleanor. Apparently there's an all-women city that raises breeding-age women, and won't that be handled with sensitivity and .... yeah, that's just going to be a trainwreck to watch, but this whole show appears to be a giant trainwreck of fun.

3. Angels are all male so far, with one exception. I'm wondering with the whole "I must not have sex but you are just so pretty" Michael scene (did he kill those women or just wear 'em out?) if that's part of the show framework, that fertile human women are the fatal flaw for male angels? Because that's a fairly grim underlying premise.

5. I'm not touching the visual effect of the overweight woman form of the Angel who was in the rink. If the human-friendly angels that have female bodies (can they change forms? did she choose that form? genders?) are the standard Hollywood pretty, I will revist my deep annoyance for that framing as just horrible, horrible.

6. There are actual politics and family dynamics and secrets. Stuff happens for a reason, and people make decisions that are not entirely stupid. For a crappy scifi show, that's a pretty high standard to meet.

7. The ariel fighting showed potential and made the angels with wings look scary.

8. Goddmanit, I wish Kings had had another season.

Kings was fun and might have flourished with another season. It's a pity another channel didn't pick it up and give it a nice home.
posted by homunculus at 10:53 PM on June 20, 2014 [2 favorites]

I thought this show was one of the most expensive looking trainwrecks I've seen in a while, which is why I wanted to discuss it here.

That magic tattoo though, that's got to be the dumbest thing ever. I think the main character thought it was a dumb idea. And if the magic tattoo is a thing, wouldn't the wisest choice be to strip the guy down and actually record it and perhaps have it tattooed on some other folks as a decoy?

There is so much wrong with this show from the very start, I doubt it will last past the first season.
posted by Catblack at 9:38 AM on June 21, 2014

Angels are all male so far, with one exception.

Two. Two of the '8-ballers' in the opening were female, but one got a bullet in the head immediately. All three were pretty big on the body horror.

Bixby*, I think? That was a genuinely nice touch, particularly her survival.

I thought this show was one of the most expensive looking trainwrecks I've seen in a while, which is why I wanted to discuss it here.

Agreed. Someone poured a whole lot of money into this thing. I'm definitely going to have to catch the rest and try to suss out WTF.

I've now watched four episodes of this show and I must say I'm unsurprised there haven't been more posts to Fanfare.

I'm still watching too. Part of it is I really enjoying watching they transform Vegas into Vega. How they use various parts of buildings in this new city is interesting. Plus lots of eye candy so...that's a plus.
posted by miss-lapin at 1:30 PM on July 28, 2014 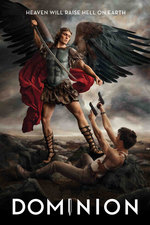