A civilian diving team are enlisted to search for a lost nuclear submarine and face danger while encountering an alien aquatic species.


The Atlantic, 25 Years In the Abyss: It made more money than The Terminator and came very close to matching Aliens at the box office. It holds a higher critical rating than Avatar and Titanic (according to the almighty Rotten Tomatoes, at least). And yet it has utterly failed to reach the same levels of cultural saturation as Cameron’s other works.

Rolling Stone Review: Though The Abyss is his most positive film, he hasn't turned Pollyanna. In this pressure cooker beneath the sea, he has created a microcosm in which each character's capacity for good and evil is tested. The effect is relentlessly unnerving.

fast-rewind.com: The Abyss is widely regarded as the toughest shoot in movie history. The actors spent up to 11 hours a day on set which, incidentally, was located 80ft down, near an incomplete nuclear reactor! Apparently, the water was so heavily chlorinated that Ed Harris's hair began to turn white. Ed Harris hated working on 'The Abyss' and has consequently never spoken to anyone about his experiences.

Time.com: James Cameron Almost Died Making The Abyss: During breaks, the cast and crew emerged from the tanks shaky and unstable, like moonmen readjusting to Earth’s gravity. Immediately they climbed into plastic hot tubs that were set up topside to warm them back up. After that many hours in the water, even in wet suits, they were chilled and clammy. Twentieth Century Fox considered the hot tubs an indulgence, and gave Hurd a hard time about purchasing them, but as production moved into fall and winter, the jacuzzis became the only place at the desolate industrial site that was warm enough for the crew to eat lunch or hold meetings. People grew exhausted and irritable, and started coming down with ear and sinus infections. Someone erased the words “The Abyss” from a blackboard on set and rewrote “The Abuse.”

New York Times: The Abyss, A Foray Into Deep Waters: The snail's pace of the shooting was almost as intolerable to the actors as the dangerous liquid environment. ''Usually you do a scene and it's over,'' says Ms. Mastrantonio. ''We never started and finished any one scene in any one day.''

io9, The Abandoned Remains of the Abyss, the Largest Underwater Film Set Ever Built: Cameron's crew constructed one of the largest underwater film stages ever built and — because of the sheer cost of disassembling it — were forced to abandon it to the elements for 20 years.

Great movie, with great SFX right up until the ending. The awesomeness of the undersea city of light is completely ruined by the crappy, cold, dead set used in the above-the-surface scene. I guess the SFX budget ran out by then and they couldn't afford to drop in a few light effects, just to bring the thing to life?
posted by Thorzdad at 5:02 AM on February 25, 2015 [1 favorite]

I have seen this movie umpteen times and I still catch myself holding my breath for large portions of it.
posted by rtha at 8:38 AM on February 25, 2015 [4 favorites]

One of my favorite movies. That scene where Bud is screaming at Lindsey to fight still gives me chills. Such great directing and acting.
posted by longdaysjourney at 9:17 AM on February 25, 2015 [2 favorites]

The ending blew me away.

If not for the ending, this would rank in my top 10 favourites. Using real props and real underwater sets gave this movie so much authenticity. Given the scorn heaped on the working environment and CGI being the only game in town, I can't see any future movies going this route again, especially given the lack of success of Waterworld (which also had many real-location nautical sets).

After becoming a fan of Michael Biehn from The Terminator and Aliens - I was surprised that all it took was a mustache for me not to recognize him.

When it first came out, I remember a friend bragging that the shop where his dad works made the suits and ROV props for the movie. This was when North Vancouver still had a decent shipbuilding industry.
posted by porpoise at 9:57 AM on February 25, 2015 [2 favorites]

I still adore this movie - every character, every relationship, every scene. Bud so furious he threw his wedding ring in the toilet, and so still in love that he immediately had to fish it out and wander around with a blue hand for the rest of the movie - classic.

"You think everything's a conspiracy." "Everything is!"

"When it comes to the safety of these people, there's me, and then there's God."

"God, I hate that bitch." "Probably shouldn't have married her, then..."

"Look, he's operating on his own. He's cut off from his chain of command. He's showing signs of pressure-induced psychosis, and he's got a nuclear weapon. So as a personal favor to me, will you try to put your tongue in neutral for a while?" (had to dig that one out of IMDB. Still love it.)
posted by kythuen at 1:09 PM on February 25, 2015 [4 favorites]

This is hands-down my favorite Cameron film, even though -- and this applies to both edits, unfortunately -- the ending doesn't really work.

There's some really good character writing -- every member of the crew of the Deep Core comes with just enough character notes and seeming backstory that they're completely believable. They're oil riggers, with Texas clearly in the background, but none of them comes off as a cliche. The seeming inherent sexism is eventually overcome by Lindsey's obvious competence, particularly the way that Bud trusts her implicitly in a crisis. Cameron pulls off a great Roddenberry take on all the technology -- just enough information so you know that they know it works.

The dive sequence is particularly good. My impression is that Cameron understood what he was doing here, but even if not, the dialog between Harris and Mastrantonio comes off as a minimalist two-hander stage play.
Presumably Cameron was working out some issues with his marriage to Gale Anne Hurd, which ended that year; I think he's admitted as much.

There are only a couple of points where the movie doesn't quite work -- e.g. the ending(s), and for me, the bit where Bud is trying to sneak up on Lt. Coffey (but it "doesn't work" in story, of course, I mean I couldn't buy it). The effects continue to hold up well, even though there have been many advances in CGI since. I love that the water tentacles just splash on the floor when the hatch is shut on them.

Just a great movie all around. Maybe if JC hadn't tried so hard with the anti-nuclear-war message?
posted by dhartung at 2:30 PM on February 25, 2015 [1 favorite]

I really believe that they could have ditched the alien subplot altogether and had a nice, taut Cold War thriller.
posted by 1970s Antihero at 2:40 PM on February 25, 2015 [1 favorite]

I was an usher in my college town's movie theater when this came out, and I used to hang out in the back of the theater for as long as I could as many times as I could. It was just amazing at the time, and the effects all still hold up nicely. Plus, I could watch Mary Elizabeth Mastrantonio can do no wrong, in my book.
posted by xingcat at 5:22 PM on February 25, 2015 [1 favorite]

"The one where Cameron's gettin' divorced" is kinda how I think of this one.

One of the best episodes a favorite movie podcast of mine has ever done is about this movie. The podcast is generally about story analysis type stuff with a healthy slathering of "how the sausage was made" in terms of the VFX and other things because the people that do the podcast are/were all in the industry. One of the regular members is Trey Stokes, who did some puppet work on The Abyss. As one would expect if you know how... intense Cameron can be, his stories about working on the movie are fantastic.
posted by sparkletone at 9:15 PM on February 25, 2015 [1 favorite]

Just watched this for the first time last night after not really even considering it for many years, but I recently watched the T2 Director's Cut and I read someone somewhere recommend that The Abyss should also be seen this way. So, why not for a first time? I say.

I liked it quite a bit and it was a bit different than I thought it was going to be. I do think I dozed off for an important 15 minutes or so (Michael Biehn going full Fred C. Dobbs one minute, everybody running chest deep in water the next). I didn't rewind, and I easily picked up and rode it through to the end. I did wonder though: isn't there supposed to be a transparentish blob-being? (Ah, found it, it must have been in my dozing period)

I can forgive the ending a bit, just because it's Hollywood and why not a little Spielberg to wrap things up? I think it would have had to be an hour longer for them to make it back up on their own power somehow, without the help of Glowing Alienbaby.

Also, two details I quite liked: how the movie would just cut to them back at the base rather than go through a whole Getting Out of the Water routine (similar to the 'just assume shit works' trope mentioned above); and how they watched the news for evidence of the seriousness of what they were working on, by the evidently-intentional starting of shit around the world by the gov't/military to distract from any possible investigation/journalism/etc.
posted by rhizome at 3:23 PM on December 18, 2018 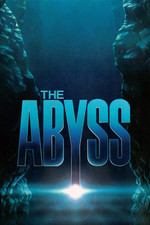