The Orphanage is a Spanish language horror film produced by Guillermo Del Toro, and directed by Juan Antonio Bayona. It is the story of a woman returning to her childhood home—an orphanage—with her husband and adopted son, intending to reopen the facility.

“The film […] is deliberately aimed at viewers with developed attention spans. It lingers to create atmosphere, a sense of place, a sympathy with the characters, instead of rushing into cheap thrills.

[…] You may be capable of walking into any basement on earth, but if you go down the stairs into the darkened basement of the house you grew up in, do you still ... feel something?”

This post is part of Metafilter's Horror Club. More about MeFi Horror Club can be found here.
posted by GrumpyDan (11 comments total) 1 user marked this as a favorite
Despite being connected with Guillermo del Toro and having some brief small flashes of the visual awesomeness that would lead you to expect, this is really a pretty conventional movie. It's a something-bad-happened-here-long-ago-and-continues-to-haunt-the-site movie with related elements of kid-with-spooky-connections-to-ghosts and everyone-thinks-the-hero-is-crazy-but-she's-not!

HOWEVER, movies of that ilk typically share several problems: weak lead cast for looks rather than ability; stupid shock scenes that derail the mood; hero sticks it out in scary spot way longer than makes any sense; and almost infallibly, shaky, hastily put together ending.

El Orfanato has none of those problems. The lead is a terrific, restrained actress, completely age-appropriate for her role. It consistently eschews cheap shocks in favor of accumulating tension and dread. The ghosts steal her kid from her early on, making her plausibly hellbent on staying at the haunted scene. And finally, the end not only develops naturally and believably, but combines real shock with a moving resolution to the lead's personal story.

So yeah, we've seen much/most of this before, but rarely so well-done. All in all, it's a polished take on a classic yarn, with particularly strong writing around the edges of the plot where lesser films get tripped up.
posted by DirtyOldTown at 12:00 PM on February 28, 2015 [5 favorites]

Just as I started watching this, like five minutes into it a weird popping noise came from my tv and smoke started pouring out the back. I hastily unplugged it and saw that the back of the tv and the tv end of the cord were all melted and burned. So anyway, super scary!

Since I only have one tv, though, it will be a couple days before I can watch the movie. Phew!
posted by Literaryhero at 5:36 PM on February 28, 2015

This movie is absolutely great and deserves to be watched on its own or in conversation with The Innocents and The Others--or if any one else knows amazing "Woman alone in house has creepy, ambiguously protective or dangerous relationship with children", let me know of them.
posted by Hypatia at 3:48 PM on March 2, 2015 [1 favorite]

I loved the first half - the imagery of the kid with the crude mask sticks with me to this day. However, there's some revelations that lessen the horror near the end, and I remember being let down by that quite a bit.
posted by destructive cactus at 11:25 AM on March 3, 2015

Huh, I wouldn't say they lessen the horror at all. I guess discussion here should be spoiler-free, but the way the movie concludes is what takes it from good to great for me.
posted by Dr Dracator at 2:05 AM on March 4, 2015 [2 favorites]

I guess discussion here should be spoiler-free

Discussion here absolutely does NOT need to be spoiler-free. Not even a little. FF discussion threads are for people who have seen the thing in question, anyone else stopping in takes their chances.

FanFare Talk posts on the other hand, in which future discussions are announced should be handled with caution where disclosing spoilers is concerned. Maybe you were thinking of that.
posted by DirtyOldTown at 11:09 AM on March 4, 2015

I don't think it lessens the horror. It changes the source of horror, in a way that doesn't feel like a cheap twist that you sometimes get in horror movies.
posted by RobotHero at 8:51 PM on March 4, 2015 [1 favorite]

I think I understand what destructive cactus is saying. There is a definite tone shift at the end of the movie which could be read in a way which lessens the horror, but I don't think that is the only way to read the ending. In the first 80% of the movie, the horror derives from a creepy (revengeful?) boy-been-wronged playing scary games with the protagonist. After the twist, it's possible to read Tomas as a friendly (but lonely) ghost who just wants to play games.

The scariness of Tomas (and the other children) is arguably undermined with the twist, but the exchange is for something much more terrifying--and a staple of the horror genre--the real enemy is ourselves.
posted by GrumpyDan at 9:29 PM on March 4, 2015 [1 favorite]

I'm glad they switched gears at the end and de-monsterized Tomas, and of course the revelation that Laura accidentally trapped her son was a pretty good twist of the knife.

I've seen so many horror movies/shows where the baddie is just so unrelentlingly magical and evil, like Marianne, it's nice to have something that subverts it by playing it a little straighter. It is also very polished and well-paced.
posted by fleacircus at 3:43 PM on October 5, 2019

This is one of my favourite horror movies. It's so restrained and there are no special effects to speak of, and yet it's as horrifying and tragic as can be. Soon after I first saw it, I had the great good luck to see a $3 DVD copy of it at my No-Frills and snapped it up.

The little boy in the sack mask is one of the most terrifying ghosts ever.
posted by orange swan at 11:10 AM on October 12, 2020 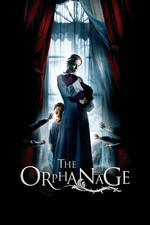