Emilio Estevez and Harry Dean Stanton star as "repo men" who get caught up in a series of bizarre adventures involving G-men, a nuclear scientist, UFO cultists and revolutionaries. Put your seat belt on and enjoy the wild ride in this groundbreaking, punk-rock, sci-fi black comedy!


The first entry in the cult film club. Here's some additional material:

Director Alex Cox discusses the film
Criterion interviews Cox about the film
A discussion of the film's icnonic soundtrack
Emilio Estevez discussing the film in 1985
Waldo's Hawaiian Holiday, the comic book sequel to Repo Man
Repo Chick, the not-actually-a-sequel by the same director and starring many of the original cast members, but as different characters
Repo Men, a dystopian sci fi film originally called Repossession Mambo but possibly remained to trade on confusion about Alex Cox's faux Repo Man sequel
posted by mathowie (23 comments total) 16 users marked this as a favorite
"You shithead! I'm glad I tortured you!"

There are a few movies like this that are ten times better than they have any right to be; by all rights they should just be a big mess (and probably were designed to be) but they somehow achieve transcendence.

Of course I love this film. The soundtrack is legendary and wonderful. The influence of this film is far and wide, and shows up in some unexpected places. (In case that's not clear, I mean the generic packaging which was created for the film, a friend of mine still has a beer can from the film.)

I couldn't get through Repo Chick, but I admired it's green-screen style. The Repo Men film is actually not related to the 1984 film at all, but is more a greedy studio trying to cash in on the fan enthusiasm of the far, far superior (and still not related to the 1984 film at all) Repo! the Genetic Opera. (Which is a cult film in it's own right, and if you every get a chance to see it with an audience dressed up for the film, ala Rocky Horror, you should.)
posted by Catblack at 10:02 AM on June 30, 2014 [2 favorites]

Confession: When I was younger I claimed I was into punk rock but in reality I only had my brother's Repo Man Soundtrack cassette that I would play over and over again so even though I knew about bands like The Circle Jerks and Black Flag, I pretty much only knew one song by each of them.

I knew the Spanish version of Secret Agent Man long before I knew the English version and until I was 40 years old I had no idea the guy who wrote Pablo Picasso graduated from the same high school I did.
posted by bondcliff at 10:08 AM on June 30, 2014 [10 favorites]

He's also an actor. He's in one of the house bands in Road House, he fronts the band of vampires in From Dusk Till Dawn, he's the guy at the bar who kills Tarantino in Desperado, he was Ramon in True Stories.

The generic packaging is what Ralphs market was using at the time. PiL appropriated it for Album/Compact Disc/Cassette.

Well holy shit, all these years I never knew. Per this article (ctrl-F for 'ralph') there were 3 prop items created for the film. When Otto visits with his parents, he's seen opening a can labeled 'Food'. (Somewhat previously.)

God, this is one of my all-time favorite films. At numerous points the editing and sound design aren't very good, but all of the dialogue is both brilliant and brilliantly delivered. It's one of the few films I consider more quotable than The Big Lebowski.
posted by The Great Big Mulp at 4:49 PM on June 30, 2014

I didn't have time to watch this movie for the film club, but I still remember the first time I saw it. It had to have been 20 years ago and I was just randomly flipping through the channels. I saw Emilio Estevez and decided to stop for some reason (don't judge me, it was a different time then!) and ended up watching the strangest, funniest movie I had ever seen. I tuned in towards the beginning of the film and watched it until the end but somehow never figured out what the name was.

I spent weeks and weeks telling everyone I knew about this wild movie that I didn't know the name of and no one believed me. Since it was 1994 or thereabouts it wasn't such a simple thing to Google it, and I spent a while thinking that I had imagined the whole thing. Finally, though, someone knew that it was Repo Man, and set me straight. I have been a huge fan ever since.
posted by Literaryhero at 6:15 PM on June 30, 2014 [3 favorites]

Harry Dean Stanton is always sublime, but words do not exist in any language to sufficiently express how good he is in Repo Man. I mean. On my most recent viewing, I became convinced that Harvey Keitel's "let's get a taco" speech to Tim Roth in Reservoir Dogs was hugely influenced by the delivery of HDS's first speech to Emilio Estevez after taking him under his wing. COMPARE! Repo Man, Reservoir Dogs.

In my movie-theater dreams, I put this movie on a triple bill with Alphaville and Kiss Me Deadly: sardonic dystopias with mysterious glowing objects of ultimately no importance.
posted by hilatron at 9:59 PM on June 30, 2014 [3 favorites]

And now, my two plates o' shrimp with Repo Man:

One weekend in the mid-80s, my dad took care of us for a "surprise" weekend. Mom and her then-boyfriend were working on some preparations for their upcoming wedding, so good old Dad got saddled with us.

Our presence that weekend coincided with the last midnight screening of Repo Man at the Orson Welles. Dad really wanted to see it, but had been working overnights at his new job and this was the only weekend he could get over to Cambridge. None of his poker buddies would have been especially adept at babysitting, so Dad took us with him to the theatre.

Seven- or eight-year-old me took a look at the poster and just about crapped my pants with fear. My younger brother, C., wasn't scared, though. I fell asleep about ten minutes in (and didn't wake up until the credits, when Dad carried me out of there).

A few weeks later, Mom was having my grandparents over for dinner. My grandmother was exceptionally fond of shrimp cocktail, and she had enlisted C. to help set the table. "Now, I want you to put the plate of shrimp on the coffee table," said she.

C. looked up at her and said "Plate of shrimp?"

"Yes, the plate of shrimp."

Mom fixed C. with a funny look, and I broke the silence by offering to put the shrimp cocktail in question on the table. Later on I had to remind C. that we weren't supposed to see that movie, that it was a movie for grownups, and that Dad could get in trouble if Mom knew we went to a midnight screening.

My younger brother grew up to play drums in a short-lived Black Flag tribute band.

Also, there is this:

One of my friends roomed with a woman who saw 'Repo Man' in its original theatrical run. One night, my friend's roommate A was hanging out with her aunt and her aunt's new boyfriend, and they told him about this funny song in the movie that went "Pablo Picasso was never called an asshole." A's aunt's boyfriend said, "Oh, I wrote that." A was all "yeah, right" and he said "No, really. I wrote that."
posted by pxe2000 at 10:11 AM on July 1, 2014 [10 favorites]

Loved the movie and had a tape of the soundtrack that I must have listened to about 3000 times.

possibly my favorite movie ever. the soundtrack changed my life as a 14-year-old suburban kid in the mid-80s.

I still quote it so often ...
Ordinary fuckin' people. I hate 'em.
that's bullshit. you're a white suburban punk, just like me.
dukie wukie hurt his little head ...
there's room to move as a fry cook. I could be manager in two years. king. god!

You know, kid, uh, usually when when someone pulls shit like that, my first reaction is, I wanna punch his fuckin' lights out. But you know something?

Just popping in to say what a great romantic Valentine's Day movie this made.
posted by asperity at 8:00 AM on February 15, 2017 [3 favorites] 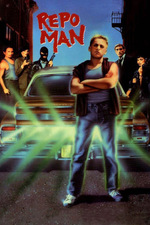