In the red universe, a Rube Goldberg-esque series of events causes someone to die. Turns out, it's not for the first time and Fringe get called in to investigate. Olivia seems to be working well with her team, all the craziness behind her. So why does she sometimes see things that aren't there? Meanwhile Walternate reassures Broyles that he has nothing to worry about with blue-world Olivia acting as a Fringe agent, and why.


In case you were wondering (I was) ballpoint pens aren't always the click-retractable pens, but can also be "stick pens". The ballpoint refers to the mechanism at the tip of the pen which allows ink to flow freely over the ball as it moves along the paper.

The plot is partly reminiscent of the Daniel Keyes novel Flowers for Algernon, though Milo's ending is quite different from Charlie's.
posted by Athanassiel (8 comments total)
Sorry for lateness; I got distracted by Easter and Daylight Savings Time. Since no one seems game to pick up posting episodes on Thursdays, I thought I'd start doing two episodes at once. This is what yellowbinder is doing over with the Buffy rewatch and it seems to be working pretty well.
posted by Athanassiel at 10:01 PM on April 5, 2015

I'm pretty confused as to why the Red Universe doesn't have ballpoints. I guess the paperless office actually happened over there?
posted by BungaDunga at 10:33 PM on April 5, 2015

I'm wondering why they'd give the patients pens and not pencils. Do they not have pencils over there? They show pens and markers in this ep.

I can see why maybe pens fell out of favor since they have the digital desktop thingies at fringe division and the tablets in the field.
posted by fluffy battle kitten at 11:15 PM on April 5, 2015

Yeah, the pen thing is weird. But they all seem to be about their little head jacks and show-mes and air tablets; even more technological than we are. So maybe paperless/penless was part of that.

I really liked the way they showed Milo calculating all the possibilities - a nice mirror of AlternaAstrid doing the same kinds of things, but hers seem more numerical and less image-based. She has a useful outlet for her skills - plus no one trying to stop her medication - so hers is a lot more socially acceptable. I also really felt for his sister. The pain of not even being able to communicate with someone you love in a meaningful way because they think they are so far above you intellectually—ouch. And Milo's predictions of what she will say reminded me of the Observers, speaking in time with Walter and Peter.

Good episode, I thought. I'm actually finding red universe more interesting at the moment, for all that I loathe Walternate.
posted by Athanassiel at 2:18 AM on April 6, 2015 [1 favorite]

This is one of my favorites. We get to see how Red Universe operates, what makes it different, what makes it the same - and we see who the players are.

Everytime Milo pops up my brain goes, "Discount, off-brand Ethan Hawke." Same thought happened when the actor was in an ep of Psych. Michael Eklund is not bad at all as Milo...my brain just ain't right.
posted by fluffy battle kitten at 4:12 PM on April 6, 2015 [1 favorite]

Ha, you're right! Fortunately, he isn't as annoying as Ethan Hawke. I refuse to watch movies with Ethan Hawke because of the depth of my hatred. Well, except I may watch Dead Poets Society again at some point; he was too young to be annoying in that one.
posted by Athanassiel at 4:56 PM on April 6, 2015

Aruba War veteran. Love these little alternative timeline touches, though they do beg the question of why the universes aren't more divergent.

I too appreciate the "paperless, pen-less, manuscript-less" future idea: very Gutenberg Elegies.
posted by Sonny Jim at 12:37 PM on January 15, 2017 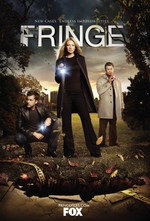