The canine star of a fictional sci-fi/action show that believes his powers are real embarks on a cross country trek to save his co-star from a threat he believes is just as real.


A.O. Scott (NYT): "'Bolt,' in other words, is a real movie — not a great one, perhaps, but a more organic and thought-out piece of work than the usual animated hodgepodge that lures antsy children and their dutiful parents into the multiplexes. It has its sentimental strains, but it doesn’t push them too hard, or resort to the crude, pandering humor of, say, the 'Shrek' franchise. Like its hero after he wakes up from his Hollywood dream life, it’s friendly, smart and eager to please. Cat people need not worry — hamster fans will be in heaven, but that’s another story — since there is enough sly, predatory feline humor to keep the thing from going entirely to the dogs."

Heidi Williams (The Oregonian): "If I may pull a few adjectives from the faint-praise playbook, while 'Bolt' isn't as funny, memorable or inspired as the animation classic from which it pilfers, it's still beautifully animated, cleanly told, professionally voiced and makes you smile without insulting your intelligence."

"'Bolt' is the first Disney animated feature made under the supervision of Pixar's creative guru John Lasseter. Although it doesn't reach the heights of 'Finding Nemo' or 'The Incredibles,' it's a masterpiece compared with Disney's 2002 'Treasure Island.'

"The house of mouse obviously has been all ears to what young audiences expect in animation. 'Bolt' comes close to the perfect mix of entrancing kids while throwing the occasional bone to their adult companions, who will see the parallels between 'Bolt' and 'The Truman Show' and recognize that Penny's sleazebag of an agent would fit right in on 'Entourage.' When Bolt disappears, the agent tries to assuage his client with a substitute, as if a beloved pet could ever be replaced even by an exact replica."

posted by joseph conrad is fully awesome (6 comments total) 1 user marked this as a favorite
This movie comes straight from the era of early Disney computer animated movies where Pixar was consistently knocking them out of the park and everyone was wondering why Disney was even trying. Before Lassiter was brought on they were whiffing in the theaters and pissing all over their classic properties with half-assed direct to video "sequels".
posted by Mr.Encyclopedia at 7:24 PM on August 24, 2015

Unfortunately Bolt did not leave as lasting an impact as Lasseter's ending the parade of sequels in favor of a new series of films focused on Tinkerbell.
posted by Mr.Encyclopedia at 7:26 PM on August 24, 2015

I read a number of positive reviews about Bolt but it unfortunately had to compete against Wall-e that very same year. Outside of that comparison, in which the movie was rolled over by a steamroller, I found the movie fine and somewhat better for the movies that Disney had been putting out, but definitely not nearly as good as the reviews had implied. Yes, it's better than an Ice Age sequel, but I think it was somewhat obvious by the work done by Disney Animation since, that Lasseter had not yet really infected the department with the same drive and creativity that buoyed Pixar. Tangled is much more superb film than Bolt (and better than the Princess and the Frog), and by that point, Disney Animation was back competing with the best (Pixar).

I don't what precisely didn't sell itself to me in the movie, but I think I just really didn't like Bolt the dog all that much. He wasn't a character I could connect with and the cat's story wasn't significant enough to hold up the movie. The animation was decent, but not inspiring. I don't recall much from the music. It's one of those Disney films that will be ranked near the bottom of their CGI efforts, ultimately, I think.
posted by Atreides at 12:36 PM on August 25, 2015 [1 favorite]

This movie is currently on high rotation at my house; I introduced it to my daughter a month or so ago. The hamster is the most glorious, excellent part of it - interestingly voiced by a storyboard artist at Disney who is now a teacher!

I enjoy the meta aspect of it very much, though some of the showbiz "critique" is ladled on too thick. The pitching pigeons are hilarious; the smarmy assistant, really lame.

It's not Emperor's New Groove territory in my pantheon of enjoyable Disney trifles (a film I've seen at least a dozen times), but neither is it, say, Big Hero Six, which we also watched this year and found visually engaging but otherwise total generic garbage and depressingly violent.
posted by smoke at 5:02 AM on August 26, 2015

Dear smoke, please to be meeting me outside to be dismembered then adjusted until you are satisfied with your care. Big Hero Six is awesome.

Bolt just missed somehow - I don't think it was the dog's personality but the little girl. I couldn't name her or even picture her, and didn't care at all about what happened to her. There was almost no sense of friendship in the story, just a sort of melancholy sadness that Bolt was pouring his heart into a relationship that didn't exist. A dog being catfished almost.
posted by dorothyisunderwood at 7:19 AM on August 26, 2015 [1 favorite]

I really liked this movie personally. I know it's manipulation but Pixar still got me crying at the end. It's the same thing that got me at that scene in Toy Story 3 -- seeing someone be resolute to their death, as long as they're facing it with people that they care about. Rage, rage against the dying of the light!

I do agree that Penny as a character really isn't very... memorable. We basically get to know her from a dog's limited perspective and she doesn't have much of a personality of her own. We're not so much invested in her as in Bolt's perfect version of her. It's really luck on Bolt's part that the only part of his life that was real was that relationship. The fact that she was voiced by Miley Cyrus is almost an Easter egg at this point, considering Cyrus's difficult relationship with her childhood fame.

I liked Mittens but I feel like her storyline didn't play out so much as it ended abruptly because Bolt was reunited with Penny. Of course she was going to stay with the family but all of her pathos is just gone at the end. I would have liked to see her learn to trust again as well.
posted by possibilityleft at 6:33 PM on August 26, 2015 [2 favorites] 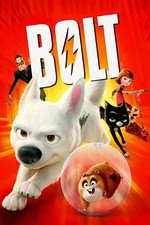