When an entry-level analyst at an unnamed Wall Street firm discovers that their portfolio of assets could melt down, big decisions with world-shaking ramifications get made.

You don't need to understand a lot about the markets to follow the film. John is a cool, polished Brit who likes to say things like, "Speak to me in plain terms," because his job requires him to manage the corporation but not necessarily understand its business. Indeed, as we now know, a fresh young college graduate could have looked at the balance sheets and clearly seen Wall Street was doomed.

It is up to John to make the margin call. In other words, to order his company to start dumping worthless holdings before the word spread that they are worthless — essentially, betraying their customers. It has now been established that some firms created hedge funds intended to fail, so they could make money betting against them. These they sold to their customers knowing they were worthless.

That, in a way, is the message of J. C. Chandor’s “Margin Call,” which does a great deal to humanize the authors — and beneficiaries — of the 2008 financial crisis. But the film, relentless in its honesty and shrewd in its insights and techniques, is unlikely to soothe the wounded pride of the actual or aspiring ruling class. It is a tale of greed, vanity, myopia and expediency that is all the more damning for its refusal to moralize.

There are no hissable villains here, no operatic speeches condemning or celebrating greed. Just a bunch of guys (and one woman, Demi Moore) in well-tailored clothes and a state of quiet panic trying to save themselves from a global catastrophe of their own making. Watching them going about their business, you don’t feel the kind of fury inspired by “Inside Job,” Charles Ferguson’s great muckraking documentary on the origins of the financial crisis, but rather a mix of dread, disgust, pity and confusion

Also reviewed at The Guardian

A "margin call" is "a broker's demand on an investor using margin to deposit additional money or securities so that the margin account is brought up to the minimum maintenance margin."

This movie is supposedly based on actual events.
posted by the man of twists and turns (5 comments total) 2 users marked this as a favorite
Saw this last year and loved it - the cast were clearly having a ball, but not at the expense of dramatic tension, quite the opposite. So much fun to see Irons unleash his true powers.

He managed to assemble one heck of a cast for what is otherwise a low-budget movie (I'm guessing - no fancy effects or stunts, mainly offices). I thoroughly enjoyed it. It felt very realistic.

Innnteresting style of film, bits of it almost theatrical. Cast were totally having fun.
(And I haven't seen "Paul Bettany" spelt "Zach Quinto" before!)
posted by runincircles at 2:57 AM on August 31, 2015 [2 favorites]

The Epicurean Dealmaker: A Certain Moral Flexibility - "Perhaps the people in my industry are more callous and calculating than others. It is certain we are more willing than some to sacrifice our own in the name of survival. But I will leave it to you, Dear Reader, to decide whether Margin Call is simply an indictment of investment banking, or an indictment of humanity itself."
posted by the man of twists and turns at 12:12 PM on August 31, 2015

This was an extraordinarily well put together little film - I watched it back to back three times after being introduced to it a couple years ago. My girlfriend at the time commented that it's restriction (self-imposed or budget-imposed, I don't know which) limitations on space (basically all takes place in the same building) and time (basically takes place in the early hours of the morning - sort of magnify the incredibly vibrant acting. There's no setting or effects-based competition with the acting and screenwriting for your attention.
posted by AdamCSnider at 4:57 PM on August 31, 2015 [1 favorite] 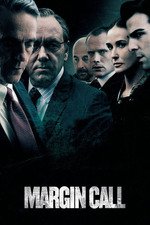