The final standoff begins in the series finale. Here, the Masons, the 2nd Mass and their newfound allies face unforeseen obstacles in the core of an iconic American location, as they try to persevere with hopes of reclaiming Earth and humanity.


Well, that was the series finale for our alien invasion apocalypse series. What did you think?

Although I'm glad the good guys won, it was unsatisfyingly brief and Independence-Day.

And to focus on rebuilding Lincoln and Washington as top priority? Nah...
posted by arzakh at 3:37 AM on August 31, 2015

That, uh, well, that happened. There was a lot of WTF-ery in this episode, even by Falling Skies standards, some of which I'll forgive as them just plain not having enough time. (Though, honestly, if you don't have enough time to do it justice, I'd rather the Espheni's motivations be left just unknown, unknowable and alien, rather than than some nonsense about revenge against the 6th-century humans that apparently fought off the first invasion attempt so handily nobody ever even heard about it.)

Best moment: the tense crawl through the egg-filled tunnels. Was a great scene, albeit glaringly out-of-place in a climactic Final Battle last episode.

Worst moment: Everything to do with Anne in this entire episode. The whole "pregnancy makes you an unstable ball of emotions and dumb as a box of rocks" is a cliche that needs to be wiped from this earth. Anne deserved to get to be a badass in this finale, not a weepy ball of hormonal stupidity that gets randomly hit by shrapnel so Tom can have an angry shout at God, err, the Dornians, back on that beach that's several days travel away, that he apparently walked to carrying her body.
posted by mstokes650 at 8:25 PM on August 31, 2015 [1 favorite]

This show had so much potential but it's been off the rails this season. At least it got an ending, which I kind of felt it needed.

I would have loved to see them have the guts to actually let Anne die. Maybe even heroically. But instead we got "oh, by the way, shrapnel" followed by the final proof that Pope was right about Tom all along: He cares about the Masons more than other people in the 2nd Mass. If the Dornians can resurrect people, why didn't Tom haul Marty's body to them? Or the guy who died in the subway tunnel? Or any of the other people who died this season?

And are we to believe that a species that gave Tom a bioweapon to kill the Espheni and conveniently failed to mention that it would also kill all of the humans would have mercy and help a human out with his loved one? 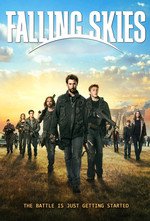