Patrick Swayze stars in this sexy thriller from the producer of Die Hard and the Matrix. Co-starring Ben Gazzara (The Thomas Crown Affair), Kelly Lynch (Charlie's Angels) and Sam Elliott (We Were Soldiers), Road House delivers no-holds-barred action that pushes the envelope for high-octane thrills! Swayze is Dalton, a legendary bouncer who comes to Jasper, Missouri, for a special purpose: to restore order at the notorious Double Deuce Bar. In one spectacular fight after another, Dalton rids the bar of thugs and henchmen. But when he runs afoul of a ruthless crime boss (Gazzara) who controls the town, the stage is set for a blistering showdown that'll leave only one man standing!

Usually I would throw a lit of supplemental links in here, but I already once made the Road House thread to end all Road House threads.
posted by maxsparber (18 comments total) 6 users marked this as a favorite
A post about this movie is quite possibly the entire reason we built this FanFare site.
posted by mathowie at 9:11 AM on July 28, 2014 [16 favorites]

There is so much to love about this movie and I'm embarrassed to say that the thought that dominated my mind during my most recent viewing was "There is no fucking way this is Missouri, this entire movie was obviously filmed in California."

This movie! I had never seen it until about 2 years ago and it far, far exceeded my expectations in many ways. My favorite parts are:

1. When he actually literally rips a guy's throat right out, on the same lakeshore where he also does romantic tai chi. I never realized that MacGruber's "rippin' throats!" was a callback to this movie - and you know, maybe it wasn't, but I'm going to not google it because I prefer to assume that it is.

2. The very end, when suddenly that entire house is filled with shotgun-wielding townspeople who have somehow appeared from nowhere. Where did they come from? It is baffling. And awesome.
posted by something something at 10:46 AM on July 28, 2014 [1 favorite]

Hah! I didn't even notice that it was supposed to be Missouri. I thought it was somewhere in the west, too (though not necessarily California).

This movie is a guilty pleasure of mine but I don't know what to say about it that hasn't been said. I have always wanted Dalton's apartment, though I bet it was cold as fuck in the winter, and I was sad to discover that they built that whole barn just for the movie.
posted by small_ruminant at 12:32 PM on July 28, 2014

I was going to post about when I saw this movie as a kid, but I apparently already did in the last thread. But I see that I left out one juicy detail: we were watching this IN FRONT OF MY GRANDMA. Seriously, I don't know what the adults were all thinking.
posted by jenfullmoon at 2:24 PM on July 28, 2014

I have an unholy love of this movie.

Also, the A.V. Club's Random Roles interview with Kelly Lynch feature really adds to this discussion so I'll just leave that link there for everyone.
posted by Cyrie at 4:37 PM on July 28, 2014

I adore how small-time the villain is: "I brought the mall here. I got the 7-Eleven, I got the Photomat here! Christ, JC Penney is coming here because of me!"
posted by Eddie Mars at 4:58 PM on July 28, 2014

Road House here and Dirty Dancing for the summer camp movie club? SWAYZEEEEEE!!!
posted by Literaryhero at 5:35 PM on July 28, 2014

It was interesting to see how much the movie followed the Western formula (new sheriff comes to town; townsfolk terrorized by a band of outlaws...). And of course, this is our second Cult Film Club pick in a row to feature Western star Sam Elliot (playing Wade Garrett in Road House, and the stranger in The Big Lebowski).

I also love the implication that there is a whole subculture of nightclub bouncers, including legendary hero-bouncers who travel wherever bouncing is needed. In my imagination, this movie inspired countless people in late-1980s America to go out, invest in run-down small-town taverns, and work to "clean them up" in spite of all obstacles.
posted by mbrubeck at 6:00 PM on July 28, 2014 [1 favorite]

I liked the first half of the movie. It was a really interesting idea of how to make safe places, with minimal violence -- I felt like the Tai Chi really underscored that. And then there was the nonstop brawl of a second half.
posted by Margalo Epps at 10:19 PM on July 28, 2014 [1 favorite]

He's not a bouncer, he's the cooler.

I never thought of it as a western, but it is exactly that. With corrupt cattle/railroad baron.
posted by the man of twists and turns at 9:53 PM on July 29, 2014

Pain don't hurt! I think that this movie has to be taken straight-faced. By assuming that everyone was in on the ridiculousness takes away from how crazy it actually is. Plus, Commando was released in 1985, and I think it was equally ridiculous (come on, chainmail?) but people generally accept that as a straight up action movie.
posted by Literaryhero at 5:57 PM on July 30, 2014

Oh, and I have mentioned this before, but in the late 90s I worked in a bar that was more or less the Double Deuce. It was marginally less violent, but there were multiple fights every weekend. Friday night AC/DC cover band, Saturday Skynyrd. I would work a split shift, coming in from 730 to 1000am for 3rd shift happy hour, and then come back in the evening for the real rowdys. They had $1.75 pitchers of Natty Light all night long and I could drink as much as I wanted while working in the kitchen. The owner would make these homecooked meals in addition to the regular bar fare, so people would be having turkey dinners at the bar while just a few feet away Back in Black would be wailing away and drunk dudes with mullets would be breaking bottles over each others' heads. Man I miss that place.
posted by Literaryhero at 5:56 AM on July 31, 2014 [3 favorites]

Literaryhero, did they have chicken wire? The consensus among musicians I have known is that chicken wire is a mistake; it just encourages people to sling bottles at you.

Way late answering this, but no, no chicken wire. For a roadhouse in central PA they got some popular tribute bands to come through, so it was a point of pride to respect the musicians for most of the patrons.
posted by Literaryhero at 1:53 AM on August 9, 2014

This is being remade by Doug Liman (Go, The Bourne Identity) with Jake Gyllenhaal in the lead.
posted by DirtyOldTown at 7:38 AM on October 11

I'm trying to imagine the universe in which Jake Gyllenhaal represents any kind of substitute for Patrick Swayze and...does not compute.
posted by praemunire at 7:58 AM on October 11 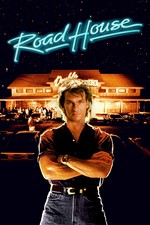