Burden of Dreams is a 1982 "making-of" documentary film directed by Les Blank, shot during and about the chaotic production of Werner Herzog's 1982 film Fitzcarraldo, and filmed on location in the jungles of South America.


The documentary shows how Fitzcarraldo managed to get made despite problems that would have floored a less obsessively driven director. Not only does director Werner Herzog have major casting problems, losing both Jason Robards (health) and Mick Jagger (other commitments) halfway through shooting, but the crew gets caught up in a war between Peru and Ecuador, horrendous weather conditions, and the rapid decline of cast and crew morale make the film a challenging task.

"Throughout production, [Les] Blank and his small crew became exhausted and exasperated from the stress of the work. Blank said that he felt 'unconnected to the people around me'. [1] Keeping up with the antics of Herzog and Klaus Kinski (the film’s star) proved difficult for the reserved, introverted Blank. By the last week of production, he was so burnt out that he feared coming out of production 'like some Viet Nam veterans, horribly calloused'. He wrote in his journal, 'I'm tired of it all and I couldn't care less if they move the stupid ship – or finish the fucking film'[2]."

Links
Burden of Dreams Movie Trailer
posted by joseph conrad is fully awesome (5 comments total) 3 users marked this as a favorite
I haven't watched this in a couple of years, but I remember what struck me most was the riveting, powerful, bizarre, and very intimate relationship between Herzog and Kinski. More intimate than some marriages. These men were thoroughly enmeshed.
posted by fiercecupcake at 8:49 AM on September 11, 2015

I was more struck by the crew's solution to finding themselves in the middle of a local native conflict, which was to give one of the sides guns.

Everything about this documentary is insane.
posted by Parasite Unseen at 10:27 AM on September 11, 2015 [1 favorite]

Weird how many parallels that Fitzcarraldo and this film and have with the pair Apocalypse Now and Hearts of Darkness.
posted by octothorpe at 12:49 PM on September 11, 2015

Fiercecupcake, have you seen My Best Fiend? (I see that it was linked in the other post.)

Aww shit, St. Hubbins, THAT'S what I was thinking of. Forgive me -- I watched all three of those movies in three weeks (some friends and I had an ongoing Herzog film series) -- and got confused. What a piece of work.
posted by fiercecupcake at 7:17 AM on September 14, 2015 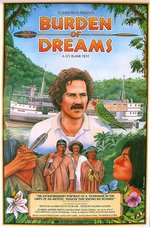