The film adaptation of George Bernard Shaw's play in which a Victorian dialect expert bets that he can teach a lower-class girl to speak proper English and thus be taken for a lady.

"Pygmalion (1938) is the non-musical film version of George Bernard Shaw's 1912 stage play, a socio-economic drama based on the Cinderella story, but actually taken from the Greek myth of Pygmalion - about a sculptor who fell in love with a marble statue of his own making.

"The Broadway musical remake that was inspired from this film, Lerner and Loewe's 1956 production, also led to the famous film musical My Fair Lady (1964), which would walk away with eight Oscars (out of twelve), including Best Picture.

New York Times film review (Frank S. Nugent writing in 1938): "Miss Hiller is a Discovery. (She deserves the capital.) We cannot believe that even Mr. Shaw could find a flaw in her performance of Pygmalion's guttersnipe Galatea."

More about actress Wendy Hiller – who was in The Elephant Man, A Man For All Seasons, and Murder on the Orient Express – from Wikipedia:

"At Shaw's insistence, she starred as Eliza Doolittle in the film Pygmalion (1938) with Leslie Howard as Professor Higgins. This performance earned Hiller her first Oscar nomination, a first for a British actress in a British film, and became one of her best remembered roles. She was also the first actress to utter the word 'bloody' in a British film, when Eliza utters the line 'Not bloody likely, I'm going in a taxi!'.

"Regarded as one of Britain's great dramatic talents, she was created an Officer of the Order of the British Empire (OBE) in 1971 and raised to Dame Commander (DBE) in 1975. Her style was disciplined and unpretentious, and she disliked personal publicity. The writer Sheridan Morley described Hiller as being remarkable in her 'extreme untheatricality until the house lights went down, whereupon she would deliver a performance of breathtaking reality and expertise."[5] (see Wikipedia for footnotes)

"In 1996, Hiller was honoured by the London Film Critics Circle with the Dilys Powell Award for excellence in British film."

Memorable quote: "Where the devil are my slippers, Eliza?"
posted by joseph conrad is fully awesome (4 comments total) 2 users marked this as a favorite
This version is the one to beat IMHO. For years I thought of Leslie Howard as Clark Gable's far duller counterpart... and then I saw this film. Oddly enough, Howard's wit and charm are on display in just about every film he made EXCEPT Gone With The Wind.

Howard was killed, possibly in the line of duty, when his plane was shot down by the Nazis during World War II. It's been said that he was spying for the British when it happened. Whether or not that was true, his death was a major psychological blow for the British. Added poignant note: Howard was born to Jewish parents.

Related: Anyone reading this who's in the Boston area... try to get tickets for the Lyric Stage's production of "My Fair Lady." It closes this Sunday (October 11).
posted by Sheydem-tants at 7:07 PM on October 5, 2015 [2 favorites]

I love this movie so. I love My Fair Lady/Pygmalion in all its permutations, but this is the movie I think of as its best example.
posted by fiercecupcake at 7:36 AM on October 6, 2015 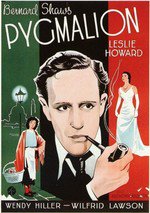