Compared to the previous story, there's a lot more going on in "The Mayors". While "The Encyclopedists" is a bit bare bones, this story is painted on a much bigger canvas. Political intrigue, deluded mobs and huge warships flying through space all feature. All of this is familiar from space opera, both modern and contemporary to the Foundation series. But in this story, it isn't the most destructive weapon that wins the day, but the soft power of religious authority.


The Foundation Trilogy has always felt deeply influenced by Marxism to me. This story is very much about religion being the opiate of the people. What's intriguing though is that Asimov doesn't present this as a bad thing. Yes, it's a weapon, a kind of society-control device, but it's shown as both preferable to, and more powerful than, the machinery of war. In fact, considering that it's published in June 1942, less than a year after the US enters World War II, it's a strikingly anti-war story. "Violence is the last refuge of the incompetent" taken to its logical conclusion. But is "The Mayors" believable? How many historical examples are there of armies being defeated by religious authority alone?

In stories like this Asimov is the most important early exemplar of the humanist left-wing of SF. I suspect that Banks read this story at an impressionable age. One way to look at this story is to think of Salvor Hardin as the wise, intelligent hero who outthinks and outsmarts the militarists, represented by Prince Regent Wienis. But, of course, that's not Asimov's point at all. The real difference between Wienis and Hardin is that one is being carried along by History to glory and power, while the other stands athwart it and gets run over and squished into gooey paste. Is Wienis a tragic hero in the disguise of a villain?
posted by Kattullus (3 comments total)
Previously: "The Psychohistorians" and "The Encyclopedists".
posted by Kattullus at 5:48 PM on October 24, 2015

The thing about Scientism in this story is unlike your traditional religion these guys are keepers of real power and technology. They don't realize it, but their knowledge of the "holy" machines they use keeps them running, so the cultures that have come to rely on Scientism end up helpless if these techno priests were to go on strike. Compare with say, the societal consequences if catholic priests stop doing their jobs.

I also enjoy the naïve view of atomic power in this story, which was printed in 1942, before the Manhattan project and practical applications for nuclear power were common knowledge. Glowing priests and tiny atomic power packs were the promise that sadly never panned out.
posted by Mr.Encyclopedia at 9:59 PM on October 24, 2015 [2 favorites]

These stories are interesting to read in publication order, because you can see Asimov focusing on certain goals and techniques, basically willing himself to become a better writer. Most of the "action" in The Encyclopedists occurs off-screen, in the most general terms. In The Mayors, Asimov describes the last refuge of the incompetent in a way that is more specific and even a bit suspenseful.

As to Wienis being a tragic hero and not a villain... well, he did kill his brother before the story started and was clearly planning on killing Leopold as well, so I'm not sure the tragic hero label works so well. He's an attempt at a multi-dimensional villain, I suppose, in that one could identify with his goals (ensure the monarchy for his descendants). The Encyclopedist's never-seen King of Anacreon carving up Terminus for his favorite generals does not inspire the same sort of identification.
posted by infinitewindow at 10:50 AM on October 26, 2015 [1 favorite] 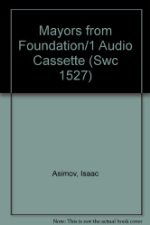