"Lipsky and Wallace were warily friendly. In 1996, Lipsky, a novelist and Rolling Stone reporter who's presented here as so Upper East Side–provincial that he's shaken up by Soho and Pulp's 'Common People,' journeyed to Bloomington, Illinois, on Jann Wenner's dime to interview Wallace, a writer whose success he begrudged. Lipsky envies Wallace's success, but Wallace seems to envy Lipsky's ease, with publishing and with women — and sometimes to think of that ease as something put-on and un-humble. 'I don't want to appear in Rolling Stone looking like I want to be in Rolling Stone,' Wallace says, perhaps the most succinct summation of Nineties alt-culture's pained ambivalence toward fame: He wrote an 1,100-page novel, but don't think he's, like, trying too hard.

"The talk continues, much of it transcribed from the real Lipsky's tape recordings, in cars, hotel rooms, the Mall of America, and Midwestern houses and apartments decorated with old furniture — the kind that's simply worn, rather than vintage. These scenes are smartly staged, attentive to every subtle slight these touchy men score off each other, especially in front of women. (Since the perspective is Lipsky's, Illinois and Minnesota are mostly out of focus, just a backdrop for Wallace.) But that conversation peters out as the film grinds on, the men getting competitive and the camera nosing into their faces. Everyone involved sifts the material a little too hard for clues to Wallace's eventual suicide, and the script labors to make clear the this five-day encounter was somehow richly significant for Wallace as well as Lipsky."


"The more people think you're really great, the bigger the fear of being a fraud is."
posted by joseph conrad is fully awesome (5 comments total) 1 user marked this as a favorite
Hey, random: I just watched this a couple of nights ago.

Jesse Eisenberg annoyed me, because he always does. Jason Segel was great. I loved the physicality of his performance, the way they had him just taking up so much space, always slightly awkwardly overstuffed into little areas.
posted by gaspode at 2:40 PM on November 17, 2015 [1 favorite]

I enjoyed the book because you get a fuller sense of how much Wallace was manipulating Lipsky the entire time. Like, running circles around him. I forget which close personal friend of DFW's said it (maybe all of them), but this is a movie about Lipsky, not Wallace.
posted by one_bean at 7:04 PM on November 17, 2015

I liked this movie a lot just because it felt really natural and loose and reminds me a lot of when I first meet people and hang with them for a few days. And Segel seems to very easily portray Wallace, which is no easy task. I'm a little conflicted about liking it, because some people have said that DFW would hate that this movie exists and especially hate the end result. It's hard to disagree, especially since he (as a character) is so into the private life and Broken Arrow within this movie.
posted by dogwalker at 7:12 PM on November 17, 2015

Saw this at Ebertfest with Segel and the director, James Ponsoldt, talking afterward and liked it a lot. The tight focus of just a few days in a life is a very refreshing format after all those horrible one-event-after-another bio-pics. Segel came across as extremely intelligent and thoughtful and Ponsoldt is really a director who's work I intend to follow after this and The Spectacular Now.
posted by octothorpe at 10:11 AM on November 18, 2015 [1 favorite]

I just streamed this on Amazon. I've read Wallace's essays but never tackled Infinite Jest. But I'm a sucker for movies about writers (I can watch The Wonder Boys again and again) and this was a fine one. Eisenberg does annoy but he's supposed to be a little annoying. And Segel is just fantastic. The dialog, is just fantastic. Yeah, I'll be watching it again.
posted by Ber at 7:12 PM on November 17, 2016 [1 favorite] 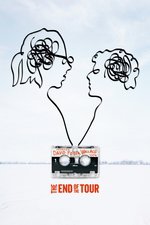