A dedicated student at a medical college and his girlfriend become involved in bizarre experiments centering around the re-animation of dead tissue when an odd new student arrives on campus.


This is Movie #8 for the MeFi Horror Film Club. I only hope I am not breaking some law of God and man by posting this! As we all know by now, that does Not End Well.
posted by kittens for breakfast (18 comments total) 1 user marked this as a favorite
This is a fun pick. I may not get to see it again until this weekend, but I am looking forward to discussing it.
posted by DirtyOldTown at 6:19 PM on August 6, 2014

Jeffrey Combs is like the Bruce Campbell that fewer people know about.
posted by Pope Guilty at 5:49 AM on August 7, 2014 [6 favorites]

Whoa, that's weird, I just randomly re-watched this a few nights ago. This movie holds up so well. Jeffrey Combs is definitely a huge part of that, but Barbara Crampton is also spectacular. A subtle foreshadowing joke I somehow don't remember picking up before -- Dan has a Talking Heads poster on his wall, which made me larf.
posted by Timmoy Daen at 10:49 AM on August 7, 2014

This is ultimately an update of the Lovecraft story Herbert West: Reanimator. I might have more to say on this later, if someone else doesn't beat me to it....
posted by JHarris at 1:14 PM on August 7, 2014

A fun followup to this is Jeffrey Combs in The Frighteners.
posted by DirtyOldTown at 4:13 PM on August 7, 2014 [1 favorite]

I was also kind of surprised at how well this held up. There are things that seem a bit dated, but it moves along at a good clip, nothing superfluous (except some limbs), and I wasn't even bothered by the mangled cat stuff (which I thought I might be), because it was so ridiculous and fake-looking (probably the least effective special effects in the whole movie).

An all-time favorite. The final fight scene in the morgue is so EC Comics / Grand Guignol. It bugged me so much when I was, like, 17, that the score by Richard Band was a transparent rip-off of Bernard Herrmann's awesome Psycho but now it fazes me not at all. Love Jeffrey Combs. Love Barbara Crampton. It has a real youthful energy to it that's only rivalled by, I don't know, Sam Raimi's The Evil Dead and Peter Jackson's Braindead. So bloody and potentially upsetting yet executed with such grisly wit and good humor.

If you like this and want more of the same ... well, unfortunately, there is nothing else like this. But the immediate follow-up From Beyond is another Combs-Crampton joint directed by Stuart Gordon, and it's decent. And I like Gordon's Dagon, too, for what it's worth, though I recall it takes a while to get going.
posted by Mothlight at 6:51 PM on August 7, 2014 [2 favorites]

Dagon had one loopy moment that approximates the tone of this entire movie, when the hero, trying to escape the Dagon cult, climbs into a car, tears open the bottom of the wheel, and touches two wires together, exactly as everybody in movies always does to hotwire a car, but in this case it sets the car horn off, accidentally alerting the cult to his presence.

I guess hotwiring a car might be harder than it is usually show in movies, and heroes might not just know how to do it.
posted by maxsparber at 6:38 AM on August 8, 2014 [3 favorites]

This is ultimately an update of the Lovecraft story Herbert West: Reanimator. I might have more to say on this later, if someone else doesn't beat me to it....

This was one of those cases for me where I had a really tough time appreciating whatever of its own merits the movie may have had, because I couldn't stop thinking of the source material and other ways it could have been adapted.

(It doesn't help that I've never been much of a fan of what I think of as "teen comedies with a lot of gore, misleadingly labeled as horror movies," which is how Re-Animator struck me when I saw it.)
posted by The Underpants Monster at 9:44 AM on August 8, 2014

maxsparber: "Dagon had one loopy moment that approximates the tone of this entire movie, when the hero, trying to escape the Dagon cult, climbs into a car, tears open the bottom of the wheel, and touches two wires together, exactly as everybody in movies always does to hotwire a car, but in this case it sets the car horn off, accidentally alerting the cult to his presence."

I haven't seen Dagon, but that sounds like pure, unadulterated genius. I might have to watch it now, just because of that.
posted by Joakim Ziegler at 8:30 PM on August 8, 2014 [1 favorite]

Dagon is really fun, and to be honest Gordon's made a boatload of movies in the last decade or so that have mostly gone unnoticed, I think, but are really worth checking out. Some are only marginally horror-y, but all are suspenseful and weird. I'm not much of a Mamet fan, really, but Gordon's adaptation of Edmond with William H. Macy is fascinating. Likewise Stuck, the story of a young woman who accidentally hits a homeless man with her car and then discovers she hasn't quite killed him (based, God help us all, On a True Story). His episode of Fear Itself ("Eater") and two episodes of Masters of Horror ("Dreams in the Witch House" and "The Black Cat") qualify as long-ish short films and are great; the last stars Jeffrey Combs as Edgar Allan Poe (!), a role he reprised for a stage show your humble narrator was lucky enough to see a few years back.
posted by kittens for breakfast at 4:16 AM on August 9, 2014 [1 favorite]

Thanks for the podcast link, WidgetAlley; that was really interesting. I would have liked to see what would have come of Gordon's original concept of a period miniseries. TV being such a different animal now than it was back then, I think he would have had a decent shot of getting it made today.
posted by The Underpants Monster at 8:50 AM on August 10, 2014

Heh heh heh. I worked on the US DVD releases of Re-Animator, Dreams in the Witch-House and Dagon. The weirdest thing I had to do was edit and transcribe various publications of Lovecraft's original serial "Herbert West—Reanimator" and then design and output a PDF for inclusion on the DVD, as well as transcribe and edit Gordon's original screenplay drafts. All of the PDF files are copyrighted by the distributor but are available clandestinely on the interwebs.
posted by infinitewindow at 11:31 AM on August 10, 2014 [3 favorites]

Hey awesome infinitewindow! I think we actually own at least two of those three, no clandestine interweb searching for us!
posted by JHarris at 5:17 PM on August 10, 2014

I'm finally re-watching this now, some twenty years after I probably saw it last.

Random thoughts:
-Is that pidgin German on the hospital sign in the beginning? Seems like it.
-The whole movie has that studio-bound, lit-from-above, 80s low budget lighting, that kind of "Fuck it, just light the whole room and let's go."
-Barbara Crampton's pleated, pinstriped, high-waisted, baggy jeans are the perfect 80s... something.
-The guy who plays Dan looks like male Anna Paquin.
-Jeffrey Combs might do the best acting in horror history, but he sure does some of the most acting.
-The animatronic zombie cat is kinda hilarious.
-Somehow it makes total sense this was turned into a stage production. It has a certain kind of theatricality.
-Is Crampton's right eye like 5-10% bigger than her left? She's not Marty Feldman or anything, but it's something you notice.
-Severed zombie head boob licking. Wow.
-The shot of the severed head held in front of the body is hilariously awful.
-I only learned this phrase a few days ago, but Megan is definitely a "Woman in a Refrigerator" right?
-The bowel strangling was pretty awesome.
-Kind of weird/disturbing that Megan's Zombie Dad was able to get the other zombies off her trail by giving them Lady Zombie.


And finally, for all of its flaws, this movie kind of codified the creative zombie guts and gore comedy that would later be its own thing.
posted by DirtyOldTown at 7:05 PM on August 14, 2014

I recently binged all of DS9, and I can't tell if Combs always delivers lines in that clipped, self-righteous tone or if that was a deliberate choice for Weyoun. "Cat dead, details later."
posted by the man of twists and turns at 3:10 AM on November 14, 2014

I saw this movie in the theater and it still rules. The fact that one of the gnarliest movies of my teens can now be caught at random on evening TV speaks well of humanity.

When Herbert is sneaking up behind Dr. Hill and the body holds the head up to look behind him is one of the great movie moments of my life.
posted by rhizome at 10:50 AM on April 9, 2020 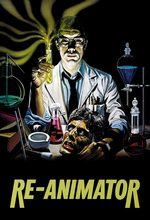