*Ash wakes up from his mind trip to find himself gagged and bound for exorcism or lobotomy, as Eligos-in-Kelly has convinced Pablo and uncle El Brujo that Eligos is in Ash.
*Pablo tells Kelly how he feels about her, while Eligos-in-Kelly lays on the seduction to try to get him to take a hit from a loaded shotgun bong.
*Ash has the world's most powerful dentures, managing to chew through his gag in time to tell El Brujo that he's got it all wrong, in time for them to get to Pablo before Eligos-in-Kelly kills him.
*Now it's Kelly's turn for the exorcism, but El Brujo's methods have no effect (aside from the practical & CGI special effects, which are terrific).
*Pablo decides to offer himself up to Eligos as a willing host in order to save Kelly.
*Eligos emerges from Kelly and flings El Brujo across the room to a death by impalement. Ash puts the "Shoot first, think never" lesson from his vision to work, and successfully shoots Eligos in the head point blank with the boomstick, exploding him to little bits of blue gloop.
*Kelly awakes with no memory of the possession. Pablo receives his uncle's charm from the funeral pyre, and possibly some of his magic judging by totems bursting into flame as he passes.
*Pablo gives Ash the new robot hand he built.
*Ruby and Fisher use Ash's old Deadite-ified hand to point them in Ash's direction.
posted by oh yeah! (4 comments total) 1 user marked this as a favorite
This gets my usual, 'argh be longer' complaint, especially given that they're weaving together A- and B-plots.

Other stuff:
* Disappointed by the shaman's death. It was a predictable note that I would've preferred they avoid. Apart from that, I liked the exorcism well enough. (Eligos choosing to leave Kelly and become vulnerable is plot-hole-ish, but I imagine even a demon gets tired of a standoff sooner or later, and I like to think the goodness behind Pablo's offer of a host body disgusted it enough to bring it out to play.)
* It's nice to see Pablo be a genuinely good guy. I hope they stick with that.
* Glad to have Kelly back for real. She's great.
* "Shoot first, think never," is definitely Ash's speed. I liked that it worked. (I love when people play with the old 'use the Force' trope.)
* The 'did you think about breathing when you were a baby' thing was appropriately batshit. I really want to know more about Lawless' deal here.
posted by mordax at 5:52 PM on November 29, 2015 [1 favorite]

I really liked Ash just watching during Kelly's exorcism. He really managed to be appropriately bemused by the whole thing.

I didn't like that Ash did some fatherly type stuff at the end. I mean he hasn't grown up in thirty years, would he really start becoming an adult now?

I did like that he used the robot hand to give Kelly the finger. That kind of brought it back around for me.
posted by Literaryhero at 8:15 PM on November 29, 2015

This gets my usual, 'argh be longer' complaint

I felt that way after my first watch Saturday night; when I decided to re-watch it Sunday morning so I could try to do a better write-up than just copying the Tivo summary, I enjoyed it much more. Definitely plan on doing that going forward.

I didn't like that Ash did some fatherly type stuff at the end. I mean he hasn't grown up in thirty years, would he really start becoming an adult now?

But isn't that part of his appeal, that he's not 100% man-child, that he will rise to the occasion eventually? That moment when he thought it was really Kelly begging him to kill her was legitimately moving. I'm not a huge horror buff, or a Three Stooges fan, so, I don't think I'd still be watching this franchise if Ash was completely unredeemable. (But, I also prefer the S-Mart ending to 'Army of Darkness' over the post-apocalyptic ending, so, I may not be a true Evil Dead fan. I did see the musical on Broadway though.)
posted by oh yeah! at 4:40 PM on November 30, 2015

I concur on being okay with Ash having some affection and concern for people he cares about. To some extent I find his manbaby thing less objectionable - even appealing - because it's that level of self-centeredness that has allowed him to be this cut off from people without going insane. He is exactly the hero needed for a world this crazed and nihilist. But I don't need him to be immune to developing feels when he bonds to people despite himself.
posted by phearlez at 10:32 AM on January 9, 2016 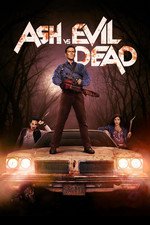