Tim is a 1979 Australian romantic drama, written and directed by Michael Pate, based on the 1974 novel by Colleen McCullough. A middle-class American woman, played by Piper Laurie, employs a developmentally impaired 24-year-old gardener (Mel Gibson).

- "The director got word of Mel Gibson's performance in Mad Max (1979) and cast him in this film. This film was shot while Mad Max was still in post production." (cite)

- "When Piper Laurie's character comes outside to read while Tim is working in the yard, the book she is reading is 'The Thorn Birds', written by Colleen McCullough, the same author as 'Tim'. When Tim joins her for tea he asks if the book is any good, and she responds that it is very interesting. Several years later, Piper Laurie had a role in the TV miniseries that was made out of 'The Thorn Birds'." (cite)

- "In her 2011 autobiography, 'Learning to Live Out Loud: A Memoir', Piper Laurie revealed that she and Mel Gibson had a one-night stand while on the set, despite their almost-25-year age difference and the fact that she was married at the time." (cite)

Reviews
The movie scene - "a marvellous and sadly under-rated movie"
Vince Canby, The New York Times - "Considering the patent sillinesses of the material, Miss Laurie and Mr. Gibson do very well, and the supporting performers, especially Mr. Kurts, are fine. "
posted by joseph conrad is fully awesome (1 comment total)
Huh, Mel Gibson's full name is Mel Columcille Gerard Gibson. I never knew that.
posted by TWinbrook8 at 12:49 AM on December 11, 2015 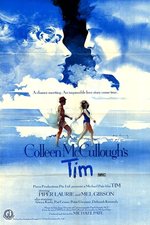