A mobster travels to Hollywood to collect a debt and discovers that the movie business is much the same as his current job.


NYTimes: If you'd like to know who Chili Palmer is, he has a solid answer: "I'm the one telling you how it is." That describes not only the no-baloney hero of Elmore Leonard's "Get Shorty," played to suave perfection by John Travolta in Barry Sonnenfeld's bright new movie, but also Mr. Leonard himself. The author's sardonic voice has been lost in most films based on his fiction, but this one nicely captures that unruffled Leonard authority. And since "Get Shorty" is about Hollywood, it invites the sneaky self-mockery that gives this film its comic punch.

Rolling Stone: In typical Leonard style the film begins in the middle of a seemingly irrelevant conversation. Chili and his hood buddy Tommy (Martin Ferrero) are sitting in a Miami restaurant, discussing the unseasonably cold weather and old Jimmy Cagney movies. Chili is a big movie fan, with a leather jacket "like the one Pacino wore in Serpico." The problem is that mob hothead Ray "Bones" Barboni (the superb Dennis Farina) has borrowed Chili's jacket from the coat room. On the drive to Ray's, Chili and Tommy hash out the etiquette for getting back the jacket. Chili acts quickly. When Ray opens the door, Chili nails him with one swift punch in the face, grabs his jacket and exits as Ray's large nose gushes blood.

Roger Ebert: One of the pleasures of "Get Shorty" is watching the way the plot moves effortlessly from crime to the movies - not a long distance, since both industries are based on fear, greed, creativity and intimidation. Elmore Leonard's characters may exist in the crevices of society, but they are smart and verbal, and don't take forever to get to the point. There are a lot of scenes in the movie where people come into the room wanting one thing and leave wanting another. They are persuaded to change their minds by the seductive lure of Hollywood.

The Elmore Leonard Paradox
posted by MoonOrb (22 comments total) 5 users marked this as a favorite
No James Gandolfini tag? Bear is one of my favourite characters in this. Sympathetic muscle seems like it would be hard to pull off, but I buy it so easily from him.
posted by ODiV at 6:25 PM on February 3, 2016

That outrageous oversight has been rectified. Thank you.
posted by MoonOrb at 6:27 PM on February 3, 2016

This movie was absolutely perfectly cast and a delight to watch. Like I was smiling as I was watching it because every scene was just so great.

I know someone who i cannot convince to watch this movie. I don't like Travolta is their reason; I explain that I'm not a Travolta fan either, but he's perfect in this movie, but so far I haven't been convincing enough.

While i didn't see the sequel, I think it was Leonard himself who identified the problem with it and other films of his novels - his characters don't know that they're funny, but too often the movie versions do.

and: yes. j lo and g cloo are such a ridiculous unit of sexy in that film, while still having very nice and real characters.
posted by Sebmojo at 12:43 AM on February 4, 2016

There is no sequel. The sequel is dead to me.

The sequel (both book and movie) were so patently cash grabs on everyone's part that they can safely be ignored in the Elmore Leonard canon.
posted by Etrigan at 6:41 AM on February 4, 2016

Was this the last movie Travolta was charming in?
posted by Diablevert at 7:17 AM on February 4, 2016 [1 favorite]

Was this the last movie Travolta was charming in?

Love this film. Not sure what happened to the Barry Sonnenfeld that made this. I love the First MIB which was made two years after Get Shorty and then just crap after that.
posted by octothorpe at 8:10 AM on February 4, 2016 [2 favorites]

I love this movie! (And the sequel is worthwhile because of Mr The Rock and his sheer force of awesomeness and complete lack of preciousness).

So, so, so many great lines and moments. Chili bouncing up the stairs in the restaurant. Talking Bear through breathing after nailing him in the balls. The Cadillac of minivans. "Don't you puke on my shoes". "I plan to say as little as possible, if that". And the epic "Fuck you, fuckball".

The commentary track on the DVD is great, including the comment that if you're gonna have John Travolta in your movie, you should show him walking around as much as possible, because he has a great walk.

And one I routinely use when I watch Holden in the Expanse "what is that? You want to go to sleep?" (Because Steven Strait is all the time with the squinting)
posted by biscotti at 8:19 AM on February 4, 2016 [1 favorite]

Look at me. No. Look at me. This is the Cadillac of mini-vans of comic gangster movies.

It's so well put together: charming stylish rogues, scary thugs, in-jokes that successfully build throughout the plot, and multiple competing characters with parallel interests driving a complicated plot that nevertheless manages to hold together and wrap up nicely. It stands well enough on its own but when you consider other examples of the genre from the same decade ranging from painfully bad (Robert DeNiro and Billy Crystal in "Analyze This" and "Analyze That") to uneven at best ("The Whole Nine Yards") to mildly amusing but inconsequential and totally forgettable ("The Freshman") it really shines.

One thing I've wondered about that rarely gets discussed is the role weather plays in the movie. The whole basic conflict is set in motion by an unusually cold day in Miami that provokes the conflict between Chili and Ray Barbone. And freak weather plays a part again when Chili shows up in L.A. to find it experiencing typhoon-like rains (which is partly how he winds up with the minivan.) Can anyone think of other examples?
posted by Nerd of the North at 11:53 AM on February 5, 2016 [1 favorite]

It might be fun to put together some kind of "Hollywood" film club; I was thinking of this in light of the release of Hail, Caesar! and how it, Get Shorty, and The Player might make fun companion pieces.
posted by MoonOrb at 12:53 PM on February 5, 2016 [3 favorites]

Get Shorty and Out of [Sight] are the best.

Yup, I marvel at Farina's ability to play funny and scary at the same time in Get Shorty. Wish we'd had him around longer.
posted by pmurray63 at 4:37 PM on February 7, 2016 [2 favorites]

Dennis Farina was the perfect actor for Elmore Leonard. Tough, funny and verbose.
posted by wabbittwax at 5:39 PM on February 9, 2016 [2 favorites]

I caught this again and it holds up so well.

I love the First MIB which was made two years after Get Shorty and then just crap after that.

The (new) TV show adaptation of the original novel with Chris O'Dowd is brilliant. Heading towards mid-second season.

Far more satisfying and entertaining than this. 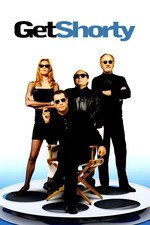