A mercenary goes after his ex-girlfriend, a singer who has been kidnapped by a gang.


Roger Ebert: Walter Hill's "Streets of Fire" begins by telling us it's a "rock & roll fable ... from another time, another place." The movie is right on the rock & roll, but the alternative time and place are mysteriously convincing -- especially if, like me, you believe the most beautiful post-war American cars were Studebakers. In this world, Studebakers made it. All the cops in this movie drive circa 1950 Studebakers, and all the people in the movie live in the shadow of oppressive elevated tracks, in a shabby, nighttime city inhabited mostly by cops, street gangs, rock fans, and soda jerks.

NYTimes: Visually, ''Streets of Fire'' lies somewhere between ''The Wild One'' and ''Blade Runner,'' as a lot of 1950's-influenced new wavers in black leather (the setting is ''another time, another place'') race through decaying urban settings that have a bleak, nocturnal, faintly futuristic beauty. The urban romanticism tends toward neon signs reflected in mud puddles and confrontations in an alley beneath elevated tracks. Mr. Hill is a superb stylist, and the gap between the visual effects and their narrative idiocy is enough to make you weep. As in ''The Warriors,'' he has constructed a great looking but essentially pointless pop parable.

Songs on Screen: 'Streets of Fire's Lost Masterpiece 'I Can Dream About You'

How Did This Get Made: A Conversation with ‘Streets of Fire’ Co-Writer Larry Gross

I Can Dream About You

Tonight is What it Means to be Young

Trailer
posted by MoonOrb (14 comments total) 4 users marked this as a favorite
My friends and I regularly referred to this movie as "Streets of Violence". It's such a pleasure, and I had young dykely adoration for Amy Madigan's character. And Michael Pare grabbing the butterfly knife from the kid and giving it back? Hell, yeah. Jim Steinman songs! Plus, there's a sledgehammer duel! How can you not love a movie with a sledgehammer duel?!
posted by rmd1023 at 7:13 PM on March 22, 2016

To this day, on the rare occasions I hear "I Can Dream About You" on the radio, I'll drive around to listen to it until it's over.

Between this, and Eddie and the Cruisers, Michael Pare was a fairly influential 'bad boy' touchstone for me as a wee lass. *sigh*
posted by librarianamy at 4:37 AM on March 23, 2016 [1 favorite]

Man, I just did not get this movie when I first saw it; "great looking but essentially pointless" sums it up. I was really confused by the stagey-ness, the mix of eras, and sorry, Michael Pare, good looking guy but just a black hole when it comes to acting. However, the "I Can Dream About You" scene was SO brilliant, also "Tonight is What It Means to Be Young". It's worth watching the movie, just for those. Also, everyone is in the movie.
posted by TWinbrook8 at 5:47 AM on March 23, 2016

I've always loved this stupid movie for some reason. I think maybe it is the setting. All we see is this endless city full of elevated trains and rain and neon. In my mind that city covers the world, one endless sprawling metropolis.
posted by Eddie Mars at 7:03 AM on March 23, 2016 [1 favorite]

Oh my God I love this movie in all its ridiculous glory! I was mostly blown away by the fact that it doesn't really take place anywhere - there's some vague reference to sectors, and the army being away somewhere, fighting some war against god knows who. But it just kind of takes place in "the city." The way all the cars that aren't explicitly part of the action are just kind of lacking in any color so they sort of fade into the background.

The Jim Steinman songs. The dialogue. That ridiculous lost boys nightclub where the bikers hang out. Willem Dafoe in rubber coveralls. The cop turning to Pare and saying, "Well my plan fell to shit. Let's see what you can do."

It's a silly, overwrought absurdity of a movie and I just adore it. It's been surprisingly influential in my own writing, particularly in its approach to that almost but not quite real setting.
posted by Naberius at 7:33 AM on March 23, 2016 [3 favorites]

I was in film school when this came out and was totally taken with the aesthetic. I loved this movie's "built a big tent over a city set so we can light it exactly as we want" thing along with "One From The Heart"'s "Let's built a replica of the Vega strip so we can do whatever we want".
posted by chazlarson at 10:21 AM on March 23, 2016

I like to imagine this is a sequel to Ladies and Gentlemen, the Fabulous Stains, and is just another adventure for rocker Corinne Burns.
posted by maxsparber at 11:02 AM on March 23, 2016

I love this movie to bits, mostly because Jim Steinman. But it has so many excellent things!

And that's why the characters always seemed like they were shouting -- the big tent made a lot of flapping noise.

And how awesome is it that McCoy was written as male -- and they cast Amy Madigan and swapped the pronouns? So delightful.
posted by asperity at 9:18 PM on March 23, 2016

Whilst it's been denied to be a literal inspiration for the Final Fight games (where a guy named Cody punches out street gangs) there's no denying that this film and The Warriors, both of which I've only seen in recent years, are 100% the filmic grist for every sidescrolling beat 'em up ever, in the same way that Alien/s defined what biological space horrors should always look like in games.

I'll just link back to my own comment in one of the previouslies on the blue, re: the Springsteen connection.
posted by Halloween Jack at 6:34 PM on March 24, 2016 [1 favorite]

I saw Streets of Fire in a theater last night (yay!) and was pleasantly surprised that co-writer Larry Gross showed up to answer questions. He confirmed that McCoy had originally been written as male, until Amy Madigan (who'd come in to read for Reva) had at it. I would've liked to hear more about what specific changes they made as a result, and what changes they avoided making. I'm assuming the "not my type" lines were probably not there for male-McCoy.

The best part might have been that Gross had never heard of Final Fight, had forgotten about it, or was pretending not to know about it out of politeness. It did make for a funnier conversation that way. If it really was news to him, I hope it's evidence of the film's cultural diffusion. Streets of Fire should've been more influential than it was, but it's still being screened (as a weeknight one-off in this case) thirty-three years later. It had a lot of great things going for it, and I wish there were more films like it.
posted by asperity at 8:47 AM on July 12, 2017 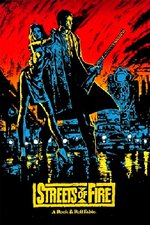