Mike D'Angelo, AV CLUB: Having won multiple awards for 2008's Waltz With Bashir, an animated reminiscence of his experiences in the 1982 Lebanon War, Israeli filmmaker Ari Folman has gone for broke with his followup, The Congress. Not since Southland Tales has such an overstuffed, incoherent, crazily ambitious sci-fi epic landed in theaters, threatening to severely alienate every viewer it fails to seduce. [...] It’s a folly of the first order, but one that many people will nonetheless want to see, if only because it’s so out there. Grade: C.

Manohla Dargis, NYT: That said, by the time the live action gives way to eye-tickling animation — and a smiling octopus is sailing through the sky, and a Clive Owen look-alike named Dylan (voiced by Jon Hamm), is helping stir up kaleidoscopic chaos — you may not care that a Soviet-era political allegory doesn’t fit all that well with a savaging of the movie business. All that really matters is that when an animated Robin shows up later, driving a convertible, her hair swirled into a Tippi Hedren scoop, you are delighted to be riding shotgun.
posted by nom de poop (2 comments total) 2 users marked this as a favorite
The digitization scene (really, any scene in this movie with both Wright and Keitel, but that one in particular) was great. Wright was so good.
posted by rmd1023 at 4:41 AM on March 25, 2016

I thought this was excellent. It reminded me in several ways of Synecdoche, New York (although I'm not sure it was as good). 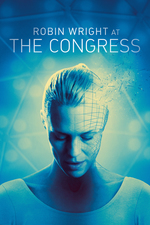