Two Navy men are ordered to bring a young offender to prison but decide to show him one last good time along the way.


NYTimes: "The Last Detail" considers the lives of career United States Navy sailors with a gravity that recalls the atmosphere of the late nineteen-forties and fifties, when World War II was still freshly won, Korea was being brought to a close, and Ike was going to throw the rascals out of Washington. In the years that preceded the political and social upheavals of the nineteen-sixties and seventies, ignorance still possessed some innocent charm.

It doesn't any more. It seems frivolous and a bit scary. So much so that I suspect that Hal Ashby who directed "The Last Detail," and Robert Towne, who wrote the screenplay, may have thought of their leading character, who is 20 years behind the times and only vaguely aware of the fact, as a lot more representative of many American lives today than the rest of us would care to think.

Senses of Cinema: The film appeared during the closing moves of a Vietnam War that began in Cold War complacency and ended in face-saving withdrawal. Afflicted by war trauma, the Watergate crisis, and, for the first time since the 1941-45 conflict, economic insufficiency, the ’70s were difficult years for Americans. As a Souza-esque brass band theme plays behind the credits for Jack Nicholson, Robert Towne, Hal Ashby, iconic figures of that New Hollywood renaissance, you realize the patriotic zeal will be tinged with irony. The autumnal Norfolk, Virginia naval base from which three sailors embark gives way to snow and wind as they head north into increasingly desolate Washington, New York and Boston.

criminalelement.com: Nicholson is Billy Buddusky, or “Billy Badass” as he’s known around the base. Buddusky and a similarly enlisted man named Richard “Mule” Mulhall (played by Otis Young) are charged with transporting Meadows to Portsmouth. They’re given a week to get there, they’re armed with pistols and handcuffs, and they get some chits to buy bus and train tickets and food and hotel stays, etc. The officer who gives them their detail encourages them to make stops in Washington, New York, and Boston along the way. Badass and Mule think the sentence Meadows received is b.s. and they feel sorry for the sad sack kid. But at the same time they know the kind of trouble they’ll get into if they let their prisoner escape before they deliver him to the brig. So they seek a middle ground where they look to show Meadows some good times before he starts his prison stint, while at the same time keeping a close eye on him and letting him know they will kill him before they’ll allow him to flee from their grasp.

Slant: Like a number of Ashby and Towne's respective films, The Last Detail ages well because it appears to retrospectively explain why so many baby boomers disappointed themselves. The pragmatic answer would appear to be that rebellion, in the face of almost absolute failure, is simply exhausting, and the anger can't sustain itself if it isn't fueled by the immediate threat of demise. The government will always eventually win so, fuck it, let's drop the kid off at the jail and grab a beer.

Trailers from Hell: The Last Detail is the perfect ’70s director’s film – its measured pace and ‘just three guys together’ scale of action focuses on the performances. It’s the kind of show where the actors really get drunk for the drinking scenes. This is the Navy as it might be for ordinary swabbies with no career goals greater than putting in their time. Buddusky is ignorant and aimless and doesn’t mind staying that way; he’s just civilized enough to follow orders and keep his nose clean. The more stable Mulhall is convinced that the Navy is the best thing that’s happened to him. He’s afforded a modicum of respect and he can send money home to his mother.

Culture Vulture: As if the nickname "Badass" weren’t enough of a tip-off, the presence of Jack Nicholson in the midst of his 70’s hot streak of rebel roles signals that Buddusky is something of a loose cannon on deck. Nicholson delivers one of the most ferociously energetic performances of his career. His Badass is good-humored but possessed of seemingly bottomless reserves of rage for both the Navy and the world outside of it, and Nicholson nails the scattershot anger that fuels his character’s tirades.

Trailer
posted by MoonOrb (3 comments total)
This is a really good movie about which I remember very little. Nevertheless, one line from it has never left my brain:

This movie made such a deep impression on me when I was 13 or 14 and caught it on cable. Buddusky is the Nicholson role I always cite when talking about just how great Nicholson can be as an actor when he isn't cast to be "Jack Nicholson."
posted by KingEdRa at 8:36 AM on April 3, 2016

Nicholson was some kind of acting force of nature for the first half of the 1970s. This may have been my favorite of his roles during that peak time, though.

I thought this film worked on so many levels, and seeing Buddusky get almost manic about his desire to show Meadows a good time made me more sad for Buddusky than Meadows, which is a real feat considering their respective circumstances.

Otis Young was such a steady, grounding presence in this movie. No one was going to top Nicholson's performance, but Young's deserves a lot of credit, too.
posted by MoonOrb at 1:03 PM on April 3, 2016 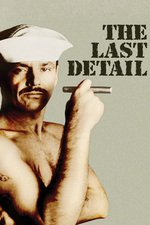