In the far future, a highly sexual woman is assigned with finding and stopping the evil Durand-Durand. Along the way, she encounters various unusual people.


NYTimes: For a while, the audience catching all the pointless, witless modernist allusions feels in on something chic, and laughs. Then it is clear that there is nothing whatever to be in on—except another uninspired omnispoof.

SF Chronicle: "Barbarella" was released the same year as "If . . ." and "2001: A Space Odyssey" -- when sex and language barriers were evaporating onscreen and films that broke ground won automatic attention. "Barbarella" got its share of ink, but I don't think its Euro-pop, horny-comic-book, anything-for-a-leer sensibility was appreciated as much then as it is now.

Behind the Scenes on the Camp Classic, 'Barbarella'

Trailer
posted by MoonOrb (12 comments total) 2 users marked this as a favorite
I watched this not too long ago, interested in Jane Fonda's early Sex Kitten image. It's... Interesting. I feel like it goes well with other works of questionable effects quality and out-there sensibility like Zardoz. Clearly meant to be experimental and boundary-pushing, so I can see why Fonda would be disappointed that people took it as a sexy farce.
In the face of 2001 this also seems like the last gasp of the retro-futuristic look of early sci-fi.
posted by Mr.Encyclopedia at 9:20 PM on May 5, 2016

I have a tremendous amount of affection for Barbarella, and will watch it whenever it turns up on the TV, which happens less and less these days.

It is possible one of the most quotable films ever, or at least the film from which the greatest density of wtf quotes can be extracted. You might not use "They are leather men, they have no fleshy substance" or "Screaming! A great many dramatic situations begin with screaming" every day, but they have their place.

It has Jane Fonda saying Llanfair­pwllgwyngyll­gogery­chwyrn­drobwll­llan­tysilio­gogo­goch. I love that all by itself.

The film has a reputation as a paragon of sexism, but my experience of sex and comedy in film was rooted in British movies of the 1970s (particularly things like Carry On... or tv spinoffs like On the Buses - I was too young to see the Confessions... films, which I'm grateful for, because I suspect they would have driven me straight into the arms of monasticism). These were simply litanies of grim, joyless misogyny, tobacco-stained middle-aged men pawing at unspeaking dolly-birds in revealing or removed tops. Ugh.

I'm really not capable of successfully mounting a defence of the film's sexual politics, but it looks like I'm about to make a failed attempt. What I liked about it when I was young was that Barbarella the character is likeable, intelligent and capable, if a bit green in the early stages . True, she succumbs to the hairy-chested Ugo Tognazzi early in the film, who teaches her the Ways of Real Sex, but after that she's pretty much her own person sexually, as she is in all other ways throughout the film. Her spiritual descendant would be the kinds of character Besson likes putting in movies - Leelou or Adéle Blanc-Sec or Lucy. I find it hard to accept that it's a bad thing that, as a teenager, I was given the opportunity to see desire as an aspiration to gravitate towards someone like Barbarella, rather than merely as leering at women and semi-impotently going "Phwoar!", as was the local custom (or, as the seventies dragged into the eighties, learning to despise myself as being like the semi-impotent leerers).

I mentioned in the Blakes 7 thread that now that CGI can do pretty much anything, it's not incumbent on effects to simply look realistic (much like the way photography freed painting), and dodgy effects don't look so bad to me any more. The ridiculous splurge of colour you find in Barbarella and Flash Gordon is of piece for me with the studiously non-Hollywood aesthetic of The Fifth Element or, possibly, Alien Resurrection.
posted by Grangousier at 1:10 AM on May 6, 2016 [4 favorites]

As an alternative take, this was one of the worse movies I have ever seen. I found the acting terrible and the underlying theme of the film felt very dated (I saw this maybe ten years ago, max?). It's a nice time capsule to cinema in the late 60's, but gosh, at least for me, it did not age well.
posted by Atreides at 6:56 AM on May 6, 2016

The 'Wham Bam Pow' podcast covered Barbarella and I recall that they really loved it. The episode can be listened to here: http://www.maximumfun.org/wham-bam-pow/wham-bam-pow-ep-9-barbarella-back-future

As an alternative take, this was one of the worse movies I have ever seen.

While it's not as good as people suggest, it's a decent movie for its time and worth watching once. I watched it in the '90s, and enjoyed it for what it was.

Which is Sexy Lost In Space. With Angels. As written by the guy who wrote Leisure Suit Larry.

This is such a campy delight. A big favorite.

"A weapon? Why would anyone want to invent a weapon? The universe has been pacified for centuries! ... You mean they could still be living in a state of primitive neurotic irresponsibility??"

I'm an old white guy but I don't find Barbarella especially sexist. I mean, sure, somebody in a position of male privilege in the movie business (Fonda's husband Roger Vadim, I guess, along with Dino De Laurentiis) decided it would be good fun to put Jane Fonda in skimpy sci-fi costumes and have her play a highly sexualized protagonist and folks will find that problematic. But isn't it great to have a film of this era that casts a woman in, essentially, a highly competent James-Bond-of-the-universe kind of role, making her way across the galaxy on a secret mission of overwhelming strategic importance and great personal peril? The counter-argument is that it's terribly discriminatory that she was only allowed to do it in a sex comedy, but I'm glad she was allowed to do it at all. Certainly there are plenty of other films of the era depicting only men doing manly things as stories worthy of exposition while treating women as little more than window dressing or trophy rewards. Barbarella gets a better deal.
posted by Mothlight at 8:55 AM on May 6, 2016 [1 favorite]

"And it's better than Bladerunner."

While it's not as good as people suggest, it's a decent movie for its time

And this is the sheer horror of Barbarella. My wife watched this for the first time recently, and she, gentle soul who will happily watch old Japanese dramas, was looking at me with an "Are we being punished?" expression.

In brief, Jane Fonda looked like she had heard of sex by reading a dictionary once, the film's sexiness wasn't, and the humor was tedious. All with the grinding pace of a 60s film maker who is trying to compensate for thin material.

But isn't it great to have a film of this era that casts a woman in, essentially, a highly competent James-Bond-of-the-universe kind of role

I'd love to see a film like that- what does it have to do with Barbarella?

The Barbarella I saw basically had a hapless women being dragged from one setpiece to another. Empowering it was not.
posted by happyroach at 10:25 AM on May 6, 2016 [1 favorite]

And it's better than Bladerunner.

If it's better than Bladerunner, why isn't there a sequel in the works?


I wish there wasn't a sequel in the works.

Part of my problem might have been that I went into Barberella with somewhat high expectations which came crashing down on fake looking angel wings.
posted by Atreides at 11:39 AM on May 6, 2016

I watched this a week after watching Zardoz for the first time. Zardoz is by far the better movie.
posted by vibratory manner of working at 12:06 AM on January 21 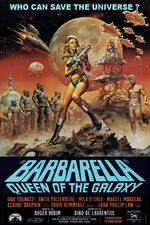